Monday, September 21
You are at:Home»News»Sarawak»Four nabbed for suspected attack on businessman 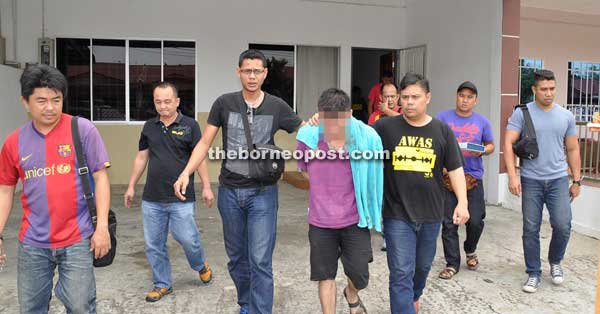 Policemen taking the suspected gang leader to the station.

SIBU: Four men have arrested in connection with the attack on a businessman at Salim Road in Stabau last Saturday.

The arrest came about after the 39-year-old businessman lodged a police report claiming that he was attacked by three strangers at his house on Saturday night.

In his report, he said he received a call from a man identifying himself as ‘Ah Huat’ at 9pm, telling him to go home.

When he arrived there around midnight, a man suddenly charged at him with a knife while two other accomplices had cockspurs.

They tied his hands and blindfolded him before bringing to the car. Later, he was thrown into a river by his attackers but he managed to break free.

More shockingly, one of his assailants even fired a shot at him but missed.

“I swam away and managed to hide from them. When they left, I sought help from my friends, who later sent me to a private hospital,” the businessman said in his report, adding that he received 40 stitches on his head.

Acting on tip-off, police conducted a raid on a house in Aping Road, Stabau around 4am yesterday, which led to the arrest of four suspects.

According to Mohd Kamal, his men found one of the suspects – believed to be the gang leader – hiding in the ceiling and with him were three suitcases containing firearms and knives.

Yesterday morning, police with their K9 unit took the suspected gang leader back to the house to assist in the investigations.