Monday, September 21
You are at:Home»News»Sarawak»`It could be a modified flare pen, not E-cigarette’

MIRI: The device that killed a 53-year-old van driver at Bintulu Tamu on Sunday may not be an electronic cigarette (E-cigarette), but a modified flare pen. 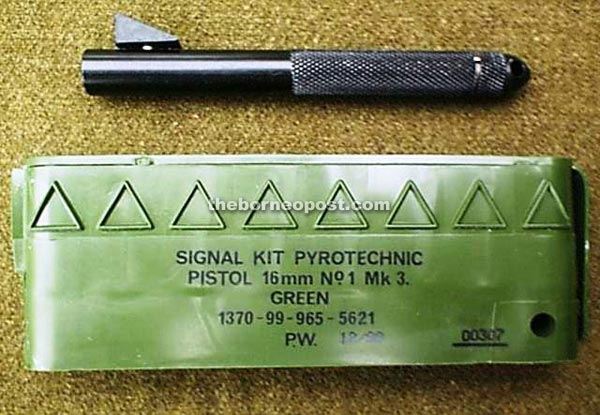 An image of a US-made flare pen from a Google search. The flare pen and the ‘e-cigarette’ are shockingly similar.

Smoker Jonathan T K told The Borneo Post yesterday it was impossible for an E-cigarette to produce a fatal explosion.

“In fact, the battery of an electronic cigarette ranges between 2,000 and 3,000 mAh. It is similar to the voltage of a smart phone battery or a power bank. Several cases of phone explosions were due to over-heating while charging.

“But in this case, there was no power input but an explosion occurred. Hence, I believe this is not an E-cigarette. Even if it explodes, it would only produce sparks harmful to the skin but not strike like a bullet.”

In the tragedy in Bintulu, the victim was walking with a friend to a coffee shop when the freak accident happened.

The force of the exploding device struck the victim in the chest, causing him to collapse.

Jonathan said based on the photo published in yesterday’s newspapers, he was certain the device was a modified flare pen.

Based on his advice, The Borneo Post browsed the Internet and found a device similar to the published image.

They are used to signal for help, alert nearby friendly forces, or to scare someone or
something.

“There are different models, ranging from minor ones to those that are destructive. Owning one is easy as it can be bought in camping shops.

“In this case, either the victim did not realise that or he just ignored the danger of modified devices. It is very sad a life was sacrificed because of plain ignorance.”