Wednesday, January 29
You are at:Home»News»Sarawak»Lucky escape for lorry driver when lorry catches fire

KUCHING: A lorry driver had a close shave with death while heading to a workshop yesterday after the heavy vehicle he was driving suddenly caught fire and subsequently went up in flames. 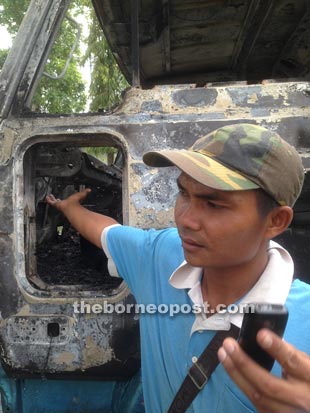 Jabu pointing to where the smoke and fire first emerged from the destroyed lorry.

The driver, who identified himself only as Jabu, said he was heading to a workshop in Bintawa via Jalan Utama around 9.30am when smoke started coming out from beneath the dashboard.

He quickly pulled over to the side of the road to check the source of the smoke when flames suddenly emerged, forcing him to abandon the lorry and flee to a safe distance.

Jabu then watched as the entire vehicle was engulfed and destroyed within minutes, with a team of firemen arriving at the scene shortly after to douse the flames.

When asked, he explained that he was going to the workshop to have a replacement battery put in after thieves had stolen the existing set during the night.

The incident occurred around 8.50am when smoke was spotted billowing from the window of the quarters – located above the coffee shop where the tenants worked – prompting a distress call to be made to the Fire and Rescue Services Department.

Teams from the Petra Jaya and Batu Lintang Fire Stations were despatched to the scene to put out the fire, which was first brought under control at 9.30am before being extinguished at 10.15am.

No injuries were reported in the incident, with about 50 per cent of the quarters estimated to have been damaged by the fire.