Wednesday, January 29
You are at:Home»News»Sarawak»New ‘menu’ from fruits to Sarikei Food Basket

SARIKEI: The rebranding of ‘Sarikei Pineapple Fest’ is a bold step aimed at propelling the development of the division in various aspects. 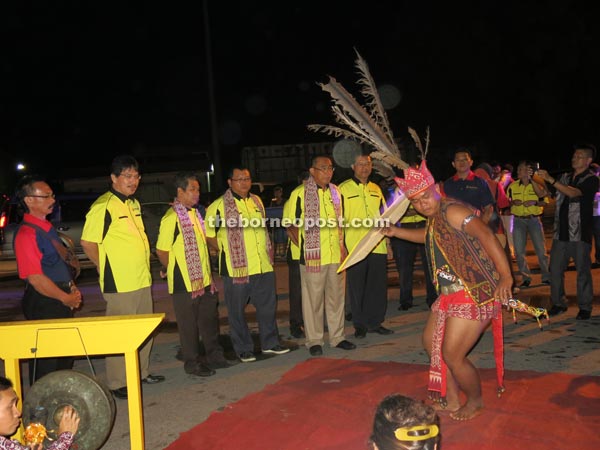 Len (fifth left) accompanied by Murni (third left), Dahim (fourth left), Chan (sixth left) and others being welcomed with a traditional ‘ngajat’ dance on arrival at the festival site.

Whatever the new name it is given, including ‘Sarawak Fruits Festival’ as suggested by Tourism Minister Datuk Amar Abang Johari Tun Openg recently, the whole idea is to widen its scope by incorporating as many sectors as possible such as economy, agriculture, education, social, etc., into its fattened ‘menu’.

Assistant Minister in the Chief Minister’s Office, Datu Len Taliff Salleh, who stated this when officiating at the closing ceremony of Pineapple Fest 2014 here on Sunday night, said the rebranded festival would be directed at promoting the division as the state’s main food producer or “Food Basket of Sarawak” and as a tourism destination.

“No doubt, this is a big challenge for various agencies in particular and the people of Sarikei in general as it requires a new ‘chemistry’ and ideas,” he pointed out.

He hoped all parties concerned would be open-minded in anticipating new challenges and ideas.

In that respect, Len concurred with Sarikei Resident Dahim Nadot in calling for the public to channel feedback on ways to improve the standard of the event from time to time.

The public could offer suggestions on the most appropriate time to hold the festival and on any related matters to improve its standard, Dahim cited, as an example of the most welcomed new inputs.

He also commended the working committee for the commitment they had given to ensure a smooth running of this year’s festival despite facing the odds of financial constraint in particular.

Both Len and Dahim called on the various parties to make early preparations to minimise glitches in future festivals, thus making it grander than ever.