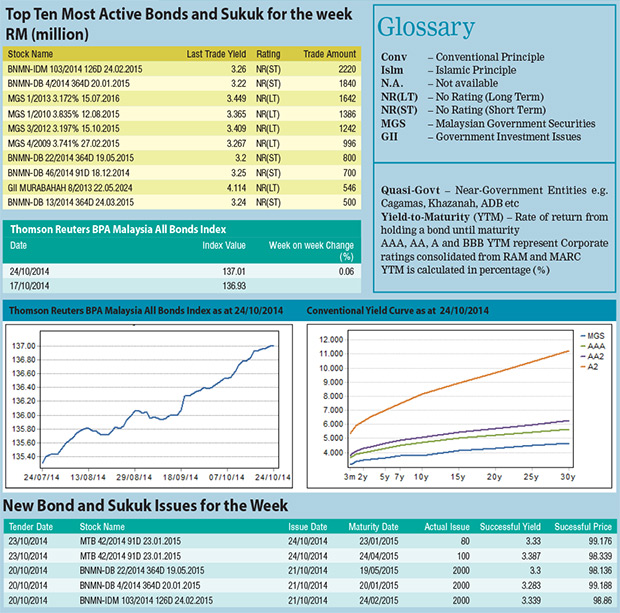 The Thomson Reuters BPAM All Bond Index posted a slight gain of 0.06 per cent from 136.93 last week to 137.01 despite tepid market activity over the week.

MGS yields were little changed from the close on last Friday in the absence of economic data release in the onshore market.

On the contrary, over in the United States, the 10-year US Treasury (UST) sold off to close at 2.29 per cent on the back of a combination of upbeat corporate earnings and positive economic data released on Thursday.

In offshore market, China’s published its third quarter real GDP data, which had expanded by 7.3 per cent, marking the slowest expansion in five years.

However, the growth rate was still slightly better than the median estimate of 7.2 per cent, bolstering the case for the government to restrain stimulus measures.

actively traded bonds dropped significantly by 53 percent to RM 11.9 billion from RM25.5 billion recorded in the previous week due to the mid-week Deepavali holiday.

The Bank Negara Monetary Notes maturing on February 24, 2015 was the most heavily traded paper with RM2.2 billion changed hands.

On October 24, 2014, Sabah Credit Corporation issued a RM50 million three year Sukuk bearing a profit rate of 4.5 per cent. The sukuk was rated AA1 with stable outlook by RAM Ratings.

On October 17, RAM Ratings revised the rating watch on RHB’s and MBSB’s ratings to positive and reinstated the stable outlook on CIMB’s ratings after it had changed the ratings to developing outlook in early October due to the proposed merger of the three entities.

The positive watch on RHB Capital’s core banking entities and MBSB was premised on the rating agency’s view that the credit standing of these entities will be strengthened when they become part of the proposed largest banking group in Malaysia as revenue and cost synergies are expected to emerge over time.

In addition, similar rating actions have been taken on RHB-guaranteed issues such as Tropicana Corporation Bhd’s Tranche 1 CP/MTN of up to RM300 million and Mecuro Properties Berhad’s Guaranteed Class D1.

Previous ArticleEquities Weekly: Global equity markets continue to correct
Next Article Have we reached bottoms yet?