Wednesday, January 29
You are at:Home»News»Sarawak»KWNP re-generating with flora and fauna

KUCHING: When Petronas brought some 200 students to plant mangrove (bakau) seedlings on a former dumping ground within the Kuching Wetland National Park (KWNP) in May last year, they never thought that the badly contaminated plot can fully regenerate. 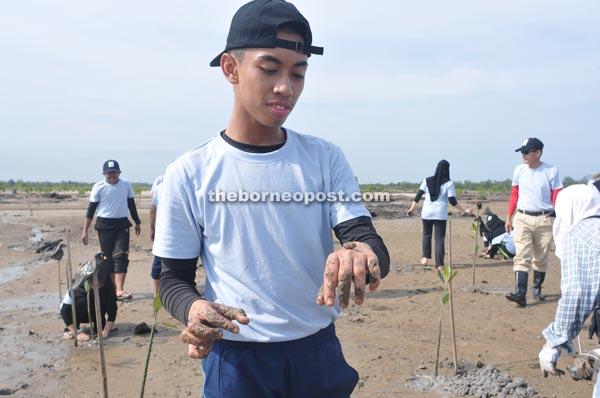 A student taking a closer look at the soft shell snails, known locally as tekoyong, which are making a comeback to the former dumping ground at KWNP.

When the students returned with a group of undergraduates from Universiti Malaysia Sarawak (Unimas) to complete their mangrove replanting project at the wetland last week, they were pleasantly surprise to find fish, wetland crabs, birds as well as signs of estuarine crocodiles and mammals such as proboscis monkey and Griffiths silver leaf monkey on the plot they had replanted just 17 months ago.

Coordinator of ecoBako project Violet Tay revealed in a press release yesterday that the mangrove seedlings planted in 2013 with students from seven surrounding schools were growing very quickly.

ecoBako project is a mangrove replanting project at the park undertaken by Petronas in collaboration with Sarawak Forest Department (SFD).

With the help of students and even musicians, Petronas and SFD have replanted more than 3,000 mangrove seedlings on the 5-hectare plot which sits on the bank of Sungai Lemidin that flow across the 6,610 hectares of wetland park.

According to SFD director Sapuan Ahmad, the KWNP are now home to hundreds of species of birds, mammals and fishes.

“The KWNP is now the habitat for 100 species of birds with 42 considered as high conservation value species and the most vulnerable of which is the Lesser Adjutant.

“There are eight species of mammals, of which six are categorised as high conservation value species, such as the Proboscis monkey and the Griffiths Silver Leaf monkey. The estuarine crocodile can also be found within the wetland,” he said.

He added four species of dolphins, two of which are Irrawaddy Dolphin and Finless Porpoise, were also found swimming at Sungai Lemidin, part of the KWNP.

“The KWNP supports at least 121 species of fishes from 78 genera and 44 families, thus comparable or higher than other mangrove areas in Sarawak in terms of population number and diversity,” he explained.

Meanwhile, the KWNP is already attracting interest from local scientists to conduct scientific research in the vast wetland park. Among them is Dr Chong Yee Ling, the coordinator of Zoology Department at the Faculty of Resource Science and Technology Universiti Malaysia Sarawak.

Chong said she intends to conduct a scientific study at the wetland to investigate the diversity of enteric virome of proboscis monkeys.

“We want to collect sample of the faeces of proboscis monkey at the KWNP for sequencing,” she said when met at the ecoBako programme last week.

“We want to identify the type of virus found in the faeces of the proboscis monkeys in the wetland and then find out how closely related they are to the viruses in humans,” she said.

“The findings of this proposed study will provide extensive information on the virome richness and diversity of the proboscis monkey, and potentially correlate with its diets or feeding behaviors. This will result in a clearer understanding of the virus ecology of the non-human primates, which is important to understand their intestinal immunology,” she said.

The KWNP was listed as Ramsar Site in November 2005 as it was deemed to be of international importance under the Ramsar Convention – an international treaty on conservation and sustainable utilization of wetlands signed in the city of Ramsar, Iran in 1971.