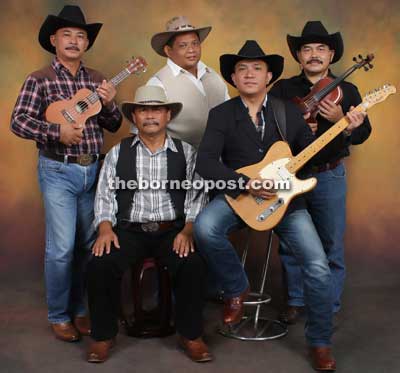 Catch Hi Breed at the preview show at Utopia this Sunday.

It will showcase Kuching’s very own country band Hi Breed. The preview show starts from 10pm and Utopia has lined up various interesting programmes before the show.

A household name in the local entertainment scene, Hi Breed will be playing a wide repertoire of country tunes at the show. All band members are self-taught musicians playing country, rock and roll, blues, rock and pop tunes but their passion is for country music.

A well-known country band from Singapore Mel and Joe will join Hi Breed for a jamming session at the preview show.

Both Hi Breed and Mel and Joe will be among bands to perform at the upcoming second edition of the Miri Country Music Fest which is organised by Planet Conventions and Events Sdn Bhd and will be staged at the Parkcity Everly Hotel Miri on Feb 7 next year. Other bands include Kareem Salama from USA, Country Sisters (Czech Republic), Rani and Westom Country Band (Indonesia), Os Pombos (Kuala Lumpur) and Starlet Band (Miri).

With this impressive line-up of bands country music fans can expect another exciting festival next year.

Tickets to the festival are priced at RM80 each for adult and include one free drink and RM40 each for a child between three and 12 years old. Each child ticket holder is entitled to either one free soft drink or an ice cream.

Tickets to the festival are available at Parkcity Everly Hotel Miri, Planet Borneo Travel and Tour Services office in Miri and Kuching and Utopia.

Next year’s festival is also endorsed by Miri City Council and supported by US Embassy.

For more details of the event, please contact Planet Conventions and Events at 082 362108 or log on to www.miricountrymusic.com.