Wednesday, July 28
You are at:Home»News»Sarawak»CM: Include animal welfare in CSR 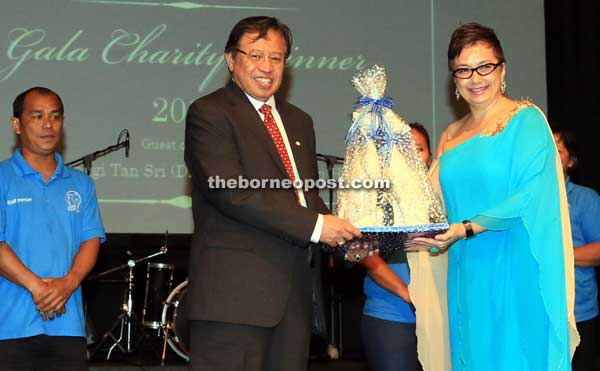 KUCHING: The Tourism Ministry is supporting the Sarawak Society for Prevention of Cruelty to Animals (SSPCA) for the hosting of ‘Asia for Animals 2015 Conference’ by allocating funds for it, said its minister Datuk Amar Abang Johari Tun Openg.

He announced the support at the SSPCA gala charity dinner on Friday, prior to the WAG Music Festival last night.

The gala dinner and WAG Music Festival is SSPCA’s annual fundraiser to raise funds for the shelter and for construction of the RM1.6-million new integrated purpose-built Animal Village.

Earlier, SSPCA president Dona Drury Wee said the five-day conference, to be held from Oct 5-9 next year, will see delegates from outside Sarawak, from 15 animal welfare groups, converging here.

The conference will be followed by WAG Music Festival the next day.

“SSPCA goes to great lengths to promote better animal welfare management, and is also the only animal non-government organisation in Malaysia to work with the local council.

“I urge corporate bodies to include animal welfare in their corporate social responsibility (CSR) budget.”

He said the site for the Animal Village is still being identified by the government and hopes the Land and Survey Department will inform SSPCA of the site by next year.

The new integrated purpose-built Animal Village will span 3 acres and animals at the existing shelter will be moved there.

Currently, the shelter houses 280 animals which costs RM30,000 monthly for upkeep of shelter, maintenance, food and healthcare for the animals.