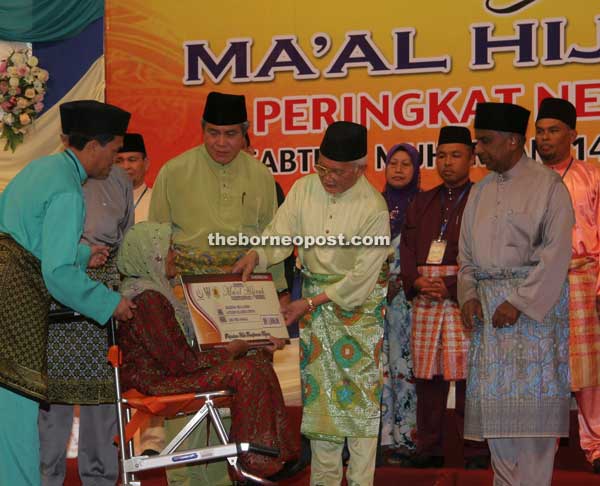 Taib with recipients of Maal Hijrah Awards on stage.

LIMBANG: Maal Hijrah is a time for Muslims to take stock and renew their commitment to do better.

Head of State Tun Pehin Sri Abdul Taib Mahmud said Muslims of today should emulate Prophet Muhammad P.B.U.H. and the four subsequent Caliphs after him in outlining in the ground-breaking Madinah Charter of Justice (Piagam Madinah), from which emerged the glory of Islamic civilisation and expansion.

“Hijrah is not just referring to the physical migration of a group of people from one place to another, but also symbolises a new movement or an outlook, given the history on the rise of Islam,” he said in his text speech prior to officiating at the state-level Maal Hijrah celebration here yesterday.

He stated that the all-inclusive and non-discriminatory Piagam Madinah, drafted in 622 AD, was the beginning of a new society that thrived beyond the shackles of politics among the Arab tribes as well as of surrounding powers of the Persians and the Romans, who felt threatened by this new order.

The Charter, he added, also marked a starting point of the new political and social structure of orderliness, fairness and equal rights.

“The Charter provided justice for all, irrespective of race or religion, which made his (Muhammad’s) leadership accepted by non-Muslim Arabs and Jews back then.”

Earlier on, Chief Minister Datuk Patinggi Tan Sri Adenan Satem said Islam had been all about inclusiveness and unity in diversity, ever since the momentous arrival of Muslims from Mecca, led by Prophet Muhammad, at Madinah that marked the beginning of the Islamic Hijrah calendar in 622 AD. He praised the Taib for practising the inherent spirit and values of Maal Hijrah among Sarawakians throughout his tenure chief minister.

“If there are disunity, splits and enmity, not a single thing could be achieved,” Adenan said in a text speech read by Second Minister of Resource Planning and Environment Datuk Amar Awang Tengah Ali Hasan.

Previous ArticleCM: Include animal welfare in CSR
Next Article Brother in cooler for drinking ‘em dry’