Saturday, January 25
You are at:Home»News»Sarawak»‘Permanent stage for Kanowit Festival ready in 10 months’

KANOWIT: The Kanowit Festival will be held at a proper and permanent stage next year, when the facility currently being built at Kanowit Waterfront is completed in 10 months’ time. 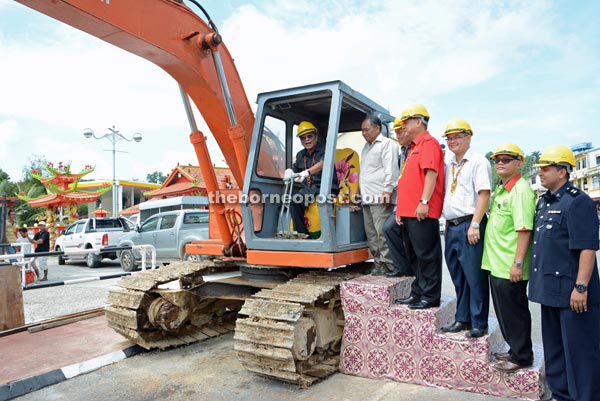 Gramong performs the groundbreaking ceremony as (from third right) Jabang, Maurice and Angki look on.

Officiating at the ground-breaking ceremony for the RM1.28-million roofed stage project here yesterday, Assistant Land Development Minister Datuk Gramong Juna said it was good news to the some 30,000 townsfolk here.

“We are proud to have the permanent structure here in our hometown because not many small towns in the state have this type of facility.

“Let us all take care of this facility and do not vandalise it,” he said.

Gramong added the new structure with its beautiful design would add aesthetic value to the waterfront, and become a tourist attraction.

At the same time, he said many more development projects would be implemented here.

“The landscape of the town has changed and it will change further with the building of infrastructure, especially the Kapit-Kanowit Road.

“More places will be linked to the town,” he said.

He said works on the RM50-million project was expected to be completed in three years’ time.