Friday, May 27
You are at:Home»News»Sarawak»Era FM’s Era Mini Concert attracts 4,000, including Bruneians 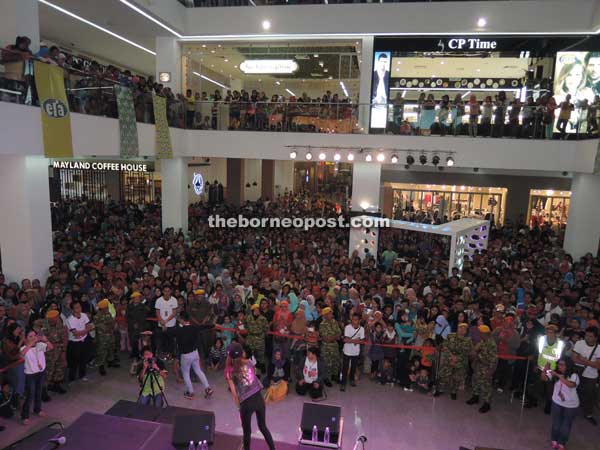 Didi Astillah entertaining the crowd at the mini concert.

MIRI: It was worth the wait for Era FM’s Era Mini Concert held at the ground floor of Permaisuri Imperial City Mall yesterday.

Although the concert featuring the latest Malaysian singing sensations started at 2pm, fans here as well as from Brunei started gathering at the shopping mall at noon. The mini concert was brought by Tourism Malaysia in conjunction with ‘1Malaysia Year End Sale 2014’.

Close to 4,000 people gathered at the ground floor including along the balconies of all the three levels of the premier shopping mall in the city to watch the concert.

Kuching born Syamin Jasmi, currently famous for her hit song ‘Lagi dan Lagi’ (Again and Again) was among artistes in the concert. To his surprise, Era DJ and announcers, brought a cake to the middle of the stage to celebrate his birthday which falls yesterday after his last performance.

The sporting audience and fans sang a birthday song for him before Syamin blew out the candle.

The other artistes in the three-hour concert were Demeisis, Awi Rafael, Didi Astillah, Mark Adam, Waris, Iwere and DJ Fuzz.

Apart from being entertained by the artistes, some of the lucky fans and members of the audience also received compact discs, signed posters and passes, souvenir T-shirts, caps and goodie bags from Era and Tourism Malaysia.