Thursday, July 7
You are at:Home»News»Sarawak»Gulliver’s travels as Wan Morshidi remembers 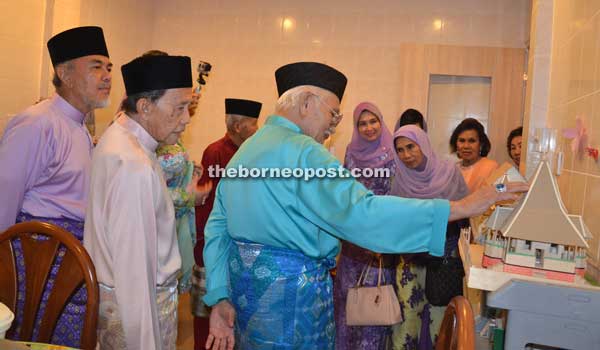 MIRI: Retired academician Datuk Wan Morshidi Tuanku Abdul Rahman, now the Miri Malay Association president, never dreamt of becoming an architect, let alone build his own house when he knows next to nothing on brick and mortar.

However, because of the fond memories of his early childhood life in Kampong Dagang from the 1930’s, he was resolute to keep them alive by applying do-it-yourself (DIY) and become a Gulliver of sorts – he started building houses in his former village of days long gone but scaled down to miniature replicas.

Wan Morshidi, 78, started his precision hobby in early January 2012 after visiting a model house exhibition here and was inspired enough, although without any picture reference or design of the kampong houses, to build 45 different houses of typical Malay architecture in the 1930s and earlier. Ten houses are still halfway completed. But there are enough for a village to take shape – if he would lay them out in a toyland setting.

“I just create the miniatures from memory using balsa wood, a knife and glue. However, the lack of balsa wood has slowed down the progress of recreating the village. Even in KL the stock is also not constant but that does not dampen my spirit and I am determined to have 60 models of the houses in our bygone era,” he told thesundaypost.

Wan Morshidi aims to complete all the 60 houses, the designs and features, from sheer memory. So far, he has spent about RM500 on the hobby.

Asked about his most prized models, he said, “the village’s Masjid Al Jamek,” where the architecture was inspired by his late grandfather Syed Othman.

“My favourite is our family home, where I was born. It was here that my good friend (Head of State Tun Pehin Sri) Abdul Taib Mahmud used to play and also on many occasions spent the night. We used to swim in Miri River behind the house,” revealed Wan Morshidi, who is the first grandson of Syed who was among the early community leaders.

One of the city’s oldest schools here, SK Syed Othman, was built on his grandfather’s land and was thus named after him.

Wan Morshidi said equally rewarding in constructing the miniature houses is that he was able to show his passion for the first time to Taib and wife Toh Puan Ragad Kurdi Taib and entourage when they came visiting for this year’s Hari Raya at their home in Piasau Link.

He said Taib was thrilled to bits to see miniature replicas of houses found in Kampong Dagang before the village disappeared, to make way for modern Miri.

Based on records, Kampong Dagang was a Malay village sited adjacent to Miri old bazaar, one of the early settlements along Miri River in the early 1900s. Most of the villagers were Melanaus who migrated from Mukah.

Wan Morshidi’s miniature homes dated back to the time when Miri enjoyed an economic boom after oil was discovered here in 1910.

From a small fishing village and trading post, it has developed into a vibrant city with a cosmopolitan outlook. It was declared a city, the only non-capital city in the country on May 20, 2005, with a population of over 300,000. 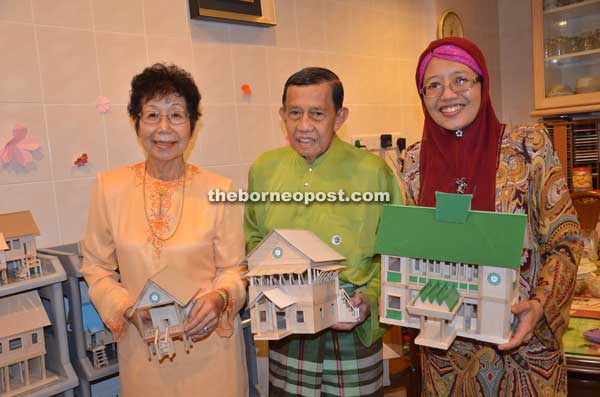 Among the collection of magnets gleaned from the travels of Wan Morshidi and his family.

Apart from the miniature replicas of the houses, Wan Morshidi’s and his wife, Datin Juriah have other hobbies that too intrigue visitors to their home.

Their very first hobby was a love for orchids, and later as they travelled far and wide, collected magnets and teaspoons as souvenirs from the foreign lands they espied. Gulliver’s travels now seem complete, as Wan Morshidi huddles over yet another passion in the garden, if not playing architect to his village of balsa wood.

Over the years, Wan Morshidi and Juriah also collected and planted different species of cacti, some as old as 27 years.

Wan Morshidi who had been in the teaching profession since 1960 and later several posts including group supervisor, school district education officer and chief examination officer, has served in areas including Sibu, Subis, Bintulu, Baram and Miri.

The couple is very active in community service, among which, Wan Morshidi is chairman of the Masjid Darul Ehsan Piasau, while wife Juriah is the Malaysia Red Crescent Miri chapter’s second vice-chairman and chairperson of Lions Club of Miri Central. Both are also enraptured with the Toastmasters club.