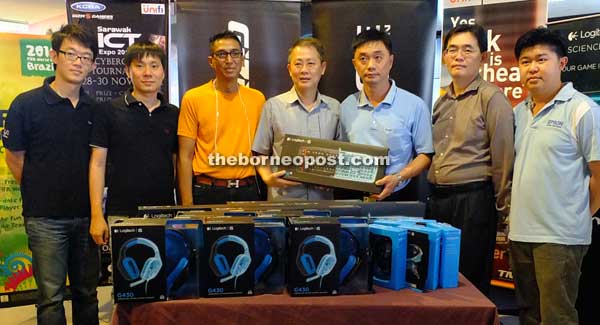 From second left, Kee, Mohd, Ho, Lee, Jee and Kho posing for a photo during a sponsorship handover yesterday.

KUCHING: Kuching Computer Business Association (KCBA) is holding a Sarawak ICT Expo 2014 at CityONE exhibition centre from Nov 28 – 30 from 11am to 9pm daily.

At the expo, KCBA and Gizmo Gamers will be co-hosting the Sarawak Expo Cyber Games 2014. The games featured are Multiplayer Online Battle Arena, DotA2 and EA Sports Fifa Online3.

EA Sports Fifa Online3, distributed by Garena, will be exhibited for the first time at the expo. It will feature a mini tournament in East Malaysia and 32 players will compete for a prize pool of RM500 in in-game prizes and merchandise, he said.

Gamers can join in on the action and win some exclusive Fifa Online3 freebies during the expo. They can also try out the game for free at Gizmo gamers OneTJ or download it from fo3.garena.com.

Telekom Malaysia, the official telco partner, will set up Unifi for the game tournament. Other sponsors are PC Image, Siemax and Epson.

Registration is still open for both games at http://bit.ly/sictcybergames.