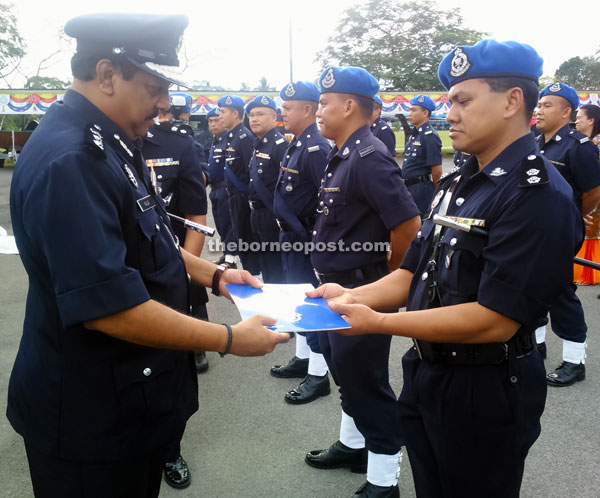 Kalai (left) presenting an officer with an Outstanding Service Award during the monthly parade in Kuching.

KUCHING: The state Marine Operations Force has scored a record haul this year, with the value of contraband items seized amounting to RM18 million – a four-fold increase over that recorded last year.

State chief ACP Kalai Chelvan said a total of 80 arrests had been made, with the majority coming under the Forestry Act, Common Gaming Houses Act, and Supply Control Act at 27, 20 and 10 respectively.

However, he said offences under the Land and Minerals Act were the ones that recorded the highest value in terms of confiscated items, with RM10 million from seven cases.

“From January to October this year, we seized nearly 80 arrests and RM18 million (in seizures) versus 24 arrests and RM4.5 million in the same period last year.

“Offences committed under the Land and Minerals Act, such as illegal sand dredging, recorded the highest amount with RM10 million from only seven cases,” he said in a press conference following a monthly parade held at the force’s headquarters here yesterday.

Illegal logging activities, he added, were the second highest with RM6.7 million seized from 27 cases.

Kalai said he was satisfied with the achievements of the state force this year, despite a shortage of manpower and logistical problems.

“We have a total of 240 personnel spread out across the state to ensure the safety of the nation and her people.

“There is no denying that we are short of personnel and (have problems with) logistics, but we will do our best with what we have to ensure that our shores would be safe and protected,” he stressed.

On the force’s preparations for possible flooding, Kalai disclosed that 133 personnel had been placed on standby across the state to assist those in need.