Friday, May 27
You are at:Home»News»Sarawak»Five awarded with scholarships from SCB 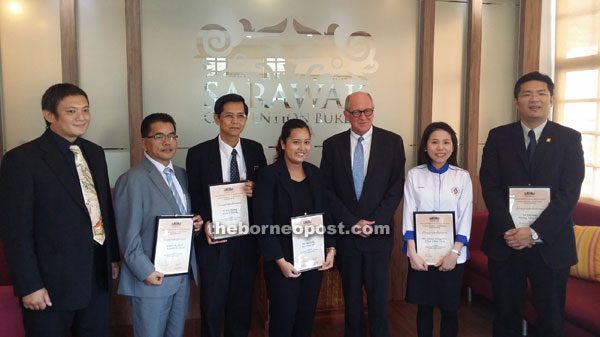 “I would like to congratulate these talented Sarawakians who have taken positive steps in building international professional networks, which will help in winning more international convention bids for Sarawak in the future,” he said during the presentation of the scholarship at SCB office in Jalan Masjid here yesterday.

Under the programme, recipients would be able to attend international conventions of their choice with a grant of up to RM10,000 covering travel, accommodation, association membership and convention registration fees.

“It is hoped that the recipients would come back with knowledge and opportunities that will benefit our community, apart from the objective to re-bring the conference back to Kuching,” he said.

The pool of applicants this year, Dylan added, came from a variety of backgrounds and industries.

“They were selected after a rigorous process involving proposal submissions and interviews with the reviewing committee.”

Participation-wise, Bong will attend the International Education and Development Conference 2015 next March in Bangkok, Thailand while Wong will be at the Institute of Electrical and Electronics Engineers (IEEE) International Conferences on Acoustics, Speech and Signal Processing in Brisbane, Australia next April.

Dr Lee, who hopes to contribute to building a healthier community, intends to share her knowledge gained from the next March’s 6th Work Congress on Women’s Mental Health in Tokyo, Japan.

Chai, on the other hand, will go for the Inter Congress 2015 of the International Antropological and Ethnological Science in Bangkok, Thailand next July.

Based on his trip there, he believed that the UAS and vehicle – drone or unmanned aircraft – had become increasingly vital in sustaining land imaging and mapping across the state.

“Sarawak has a vast area of forest, apart from the dams and other infrastructure. Therefore it is critical to set up this system for surveying and mapping, especially on miniature or smaller scales which could do what big aircraft could not and ot risking the lives of humans in certain conditions.

“Moreover, the drone also has the ability to transport necessities or emergency needs to inaccessible areas without a pilot. This technology is also important for observation, surveillance and intelligence.”

However, Jeannoth also highlighted the need to implement a proper regulation and law on the use of drones in the country, given the concerns over privacy and safety. Currently, he is drawing a proposal to acquire the technology.

The scholarships are open to Sarawakians aged 18 and above, from educational institutions, private companies or government departments – even students who have support from their universities or college can apply, as long as they are existing members of non-profit or government associations.

The awards, now in its sixth year, have so far benefited more than 20 individuals.