Wednesday, February 8
You are at:Home»News»Sarawak»Latest on the saddle: ‘Sunset Kampung Tour’
For the freshest news, join The Borneo Post's Telegram Channel and The Borneo Post on Newswav. 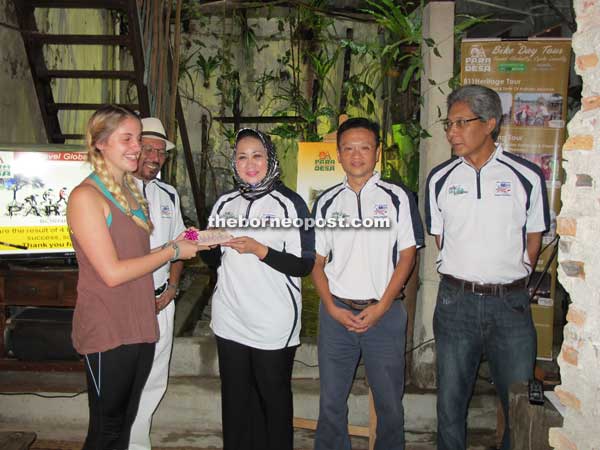 The latest product is the seventh bike tour introduced by Paradesa Borneo.

It is a romantic sunset ride on bicycle through several villages in Satok, followed by a traditional home-cooked dinner before returning in style on a surreal sunset sampan cruise.

Participants will be served dinner on a riverbank patio with a stunning sunset view of the Astana, State Legislative Assembly Complex and the Mosque.

In a simple address, Sharifah Hasidah suggested that the company enlist villagers in their bike tours to better expose cyclists to the local culture.

“Villagers would love to receive foreign tourists, so bring in our local people to participate on your bike tours. Perhaps Paradesa Borneo can also consider doing bike tours in my constituency.”

“We hope in the future to contribute more to Sarawak tourism industry by promoting a greener, healthier and adventurous tour through our bike tour products.”

Chua said about 60 per cent of its customers came from Europe while 18.2 per cent were from New Zealand and Australia.

He added that the Netherlands topped the table with the most customers, followed by the United Kingdom and Australia.