Tuesday, May 17
You are at:Home»News»Sabah»Volkswagen aficionados attend Borneo Bug Fest 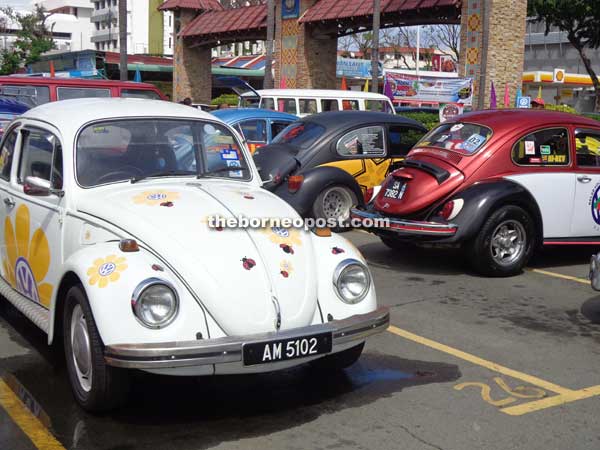 Some of the Volkswagen cars that took part in the Borneo Bug Fest 2014 event.

KOTA KINABALU: Volkswagen aficionados from all over Sabah, Labuan, Sarawak and Brunei Darussalam thronged the City Hall car park here to exhibit their own Volkswagen car (better known as ‘the Bug’) while admiring what other ‘Bug’ owners had to show off their cars during the Borneo Bug Fest 2014 held here yesterday.

Some 80 of the much loved Volkswagen cars were exhibited by participants comprising 55 from Sabah, 11 from Labuan and five each from Sarawak and Brunei Darussalam.

Mayor Datuk Abidin Madingkir in his speech at the opening of the Borneo Bug Fest 2014, said the venue of the event was strategic as it is in the city centre and adjacent to the weekly Gaya Street Fair.

“I hope that the event will not only allow Volkswagen car owners to display their cars but to also serve as a platform for them to strengthen existing ties and forge new ones,” he said in his speech, which was delivered by Volkswagen Kinabalu Sabah Club president Alijus Sipil.

Abidin said he welcomed the event as it created more activities in the city for the public to enjoy.

“I urge our visitors from Sarawak, Labuan and Brunei Darussalam to take time, after the event, to explore the tourist attractions in Sabah,” Abidin said.

According to Alijus, the Volkswagen Kinabalu Sabah Club has about 100 members, 60 of whom are active members. He said the participation this year was less than previous years and the reason could be that there are many other events being held simultaneously this weekend.

He added that currently Volkswagen owners are sourcing parts for their vehicles from Kuala Lumpur, Indonesia and Thailand.

Previous ArticleMa’s party post at risk after polls rout
Next Article Korean chefs in the making, only at UCSI