Saturday, July 11
You are at:Home»News»Sarawak»Implementation of project to be expedited 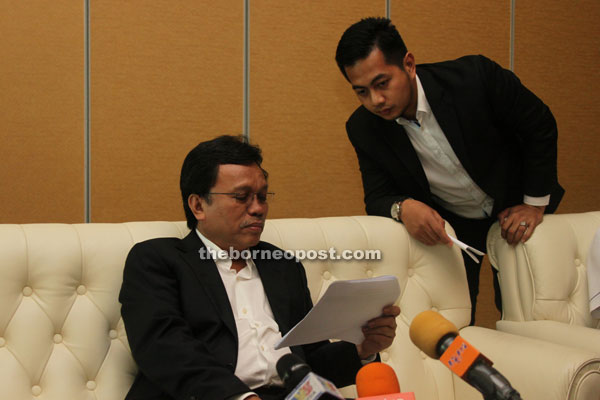 Shafie (seated) going through figures on the state’s projects with his press secretary Zamri Maulan.

KUCHING: Rural and Regional Development Minister Datuk Seri Shafie Apdal has given his assurance that basic infrastructure projects in the state for 2015 will be implemented as soon as possible.

He assured his ministry had started preparations last month to arrange for open tender for the projects which will be offered from as early as January next year.

“I hope that the open tender can be carried out by next month and this is one of our early preparations to ensure that projects in Sarawak can be implemented as soon as possible,” he told a press conference at the VIP Lounge of Kuching International Airport here yesterday.

Shafie, who was here on an official visit where he was conferred Panglima Negara Bintang Sarawak (PNBS) which carries the title ‘Dato Sri’ by the Yang di-Pertua Negeri Tun Pehin Sri Abdul Taib Mahmud at the Astana yesterday morning, pointed out that a total of RM972 million had been allocated to implement the basic infrastructure projects in Sarawak next year.

The projects include construction of rural roads in Kapit and in other districts as well as electricity supply, water supply.

On the progress of rural projects in the state thus far, Shafie said that most have run smoothly though some had encountered problems.

“More than 60 per cent of rural areas in Sarawak now have electricity supply while development of rural roads has surpassed more than 70 per cent,” he noted.

Meanwhile, projects under the 10th Malaysia Plan which have not been implemented will be brought forward for completion next year.

“There are only a few projects which will be brought forward to next year. As of November this year, the percentage of achievement for road construction stands at 98 per cent whereas for electricity and water supply, it is almost 70 per cent.

“We will continue with whatever projects that have yet been implemented to ensure that the people receive this facilities,” he said, adding that project delays were usually due to land issues.

Previous Article‘Sedition Act must not be abused’
Next Article Police seize pistol, knife from shop assistant