Wednesday, July 6
You are at:Home»Business»StocksElite from HELP University crowned as National Champion 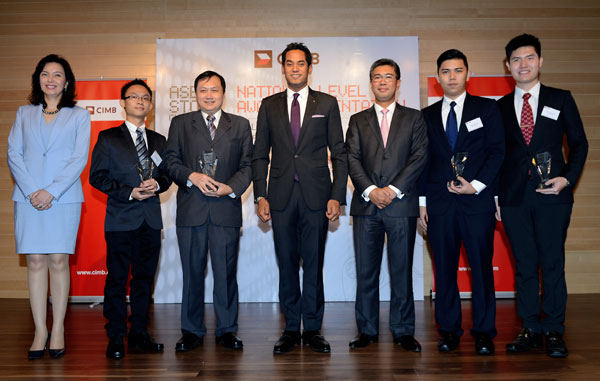 KUCHING: StocksElite, the team from HELP University was crowned the Malaysian Champion at the CIMB ASEAN Stock Challenge 2014 as the team with the best trading strategy paper among the top three most profitable teams in Malaysia.

StocksElite will now advance to compete with the national champions from four other countries for the Regional Champion title and the grand prize of US$12,000 at the Challenge’s Regional Grand Finale.

In his speech at the award ceremony, Group Chief Executive of CIMB Group Tengku Dato’ Zafrul Tengku Abdul Aziz said, “We started in 2010 with only 16 Malaysian teams. Today there are almost 2,000 teams which comprised of 5,500 students from 127 universities across five ASEAN countries, demonstrating their ability to trade stocks on four major ASEAN stock markets.

“I am also proud to report that Malaysian teams performed very well this year whereby 13 of the top 20 teams across the region are from Malaysia. This year, we have also extended the competition to students from Cambodia, and increased the total cash prize from US$34,800 to $38,000.”

At the ceremony, CIMB Group also awarded the top 20 Malaysian teams with ‘Certificates of Achievement’, an increase from last year’s top 10 teams. This was done because the competition had become keener with a 50 per cent increase in the number of registered teams from 847 in 2013 to 1,272 this year.

The certificates were given in recognition of the students’ accomplishment and as encouragement for greater participation in future competitions.

“I would also like to call your attention to UiTM, which has the most number of teams this year with 166 teams compared to only 10 last year. In fact, a lecturer of UiTM Bandaraya Melaka has made this a compulsory assignment for his students!”

“This is what I find very energising about being a part of CIMB – our can-do and innovative spirit. The CIMB ASEAN Stock Challenge is one example of this boldness to “innovate” for the better good of the communities that we serve, to nurture young talents before they even enter the workplace.

“The CIMB ASEAN Stock Challenge provides an avenue for students to put into practice what they have learnt or are interested in, to trade real-time on four stock exchanges, and have their trading strategy evaluated by professionals.

“Although there is no real money at risk in the simulation itself, there are real cash prizes, internship opportunities, and certificates of achievement.

“Our commitment to talent development continues as these young talents join us as graduates and progress in their careers; from our flagship The Complete Banker programme and the innovative CIMB Fusion, to the Global Employee Mobility scheme and the CIMB-INSEAD Leadership programme – we truly want to enable our staff to realise their maximum potential,” concluded Zafrul.

The Grand Finale will be held at the Stock Exchange of Thailand (SET) in Bangkok on January 19, 2015. The five finalist teams from Malaysia, Indonesia, Singapore, Thailand and Cambodia will present their strategies to an expert panel of judges to determine the ultimate champion of the CIMB ASEAN Stock Challenge 2014 and winner of the US$12,000 grand prize.

Previous ArticleCorruption on rise in Turkey, China — TI
Next Article SBC and GlucanBio link up for research collaboration