Sunday, February 5
You are at:Home»Columns»Uncle DI»Counter service with a smile
For the freshest news, join The Borneo Post's Telegram Channel and The Borneo Post on Newswav. 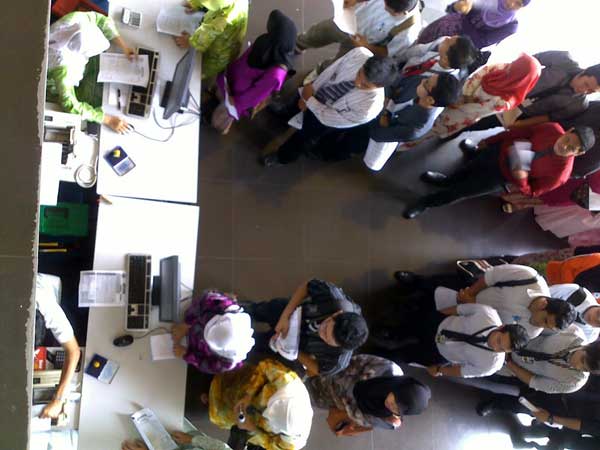 Serve with a smile.

WHILE the National Economic Consultative Council was in session in 1989-1999, I spent a lot of time at the Singapore airport while waiting for the next flight to KL.

If my memory serves me right, there were no direct flights by MAS between Kuching and Kuala Lumpur at the time. So Singapore airport was the transit point between the two capitals where working hours were spent in addition to those inside an aircraft. I had to fly to KL for the sessions of the National Economic Consultative Council and one of its committees. A sort of duty, I thought, to the nation – with a smile.

By coincidence, at the same time Singapore was having a Smiling Campaign in order to impress on the tourists to the city state – smiles everywhere, at the Immigration counters, at the restaurants, at the duty free shops – genuine or otherwise I could not tell. Those smiles helped minimise the boredom especially when there was a flight delay.

All this happened years ago.

On Tuesday, I had to renew my international passport. Its lifespan would expire within six months.

You had better believe this that the local Immigration office must be one of the most efficient departments in the whole of Malaysia. For within one hour I got my brand new passport. However, in order to get this service done so fast, you would have to do your part of the bargain. Which I did.

Take along your present passport and your Identity Card or MyKad. Go the office early and join in the queue for the numbers. When it comes to your turn, hand over your documents to the officer at the counter with a smile. She hands them over to another officer who did not smile as it was a serious, you see, checking your particulars. Who knows you might have undergone plastic surgery to your face in the meantime.

Within minutes, the officer returns your IC with a number on a chit of paper but retains your passport. Sit down and wait for your turn at the next counter. Meanwhile, measure your own height against a marker on the wall. Who knows? You have in the meantime grown not only in stature but possibly also in wisdom. I did not measure myself because my height has remained for years; as for wisdom, I have been wise after the event many times.

Then your number may be out next. There’s a mirror in front of which you preen yourself. You are going to be photographed after you have adjusted the collar of your shirt and combed your unruly hair. In this respect, I had no problem: I had nothing much to comb. I was given a dark jacket to wear because I was wearing white and that was not allowed. That jacket suited me perfectly; it must have been worn by many men before me.

Then wait for your name to be called out by the Payment Counter. Ready with cash, pay, get a receipt and proceed to the Counter 14 for your passport, That’s it. Within one hour you will get a brand new passport. Don’t forget to smile while thanking the officer for excellent service. And you can now travel overseas.

All done with a smile; that’s the Malaysian way. All done fast; thanks to technology too.

I haven’t finished. After I had got my passport, I was happily settling down for a fresh coconut and a couple of banana fritters at a stall near the office. I was careful with the new document by placing it near my thigh. Refreshment finished, I walked away to the car and some one was following me and shouting “uncle, uncle’’ waving something – my dear passport! I thanked him profusely with a good laugh at my stupidity.

Who says Sarawakians are not honest? Black sheep there may be many among us but the majority are honest and kind like this boy, who I had not the sense to find his name. I wish to thank him through the medium of this column for an excellent job to an absent-minded old man.

In the light of the recent news reported in a national vernacular paper about the Immigration Department being one of the most corrupt departments, it is hard to believe the stereotyping. Like any department, which provides service to the public, the Immigration Department may have been harbouring a few black sheep but on the whole the overwhelming majority of staff of all categories are not corrupt.

With that belief in the good side of human nature, smile!