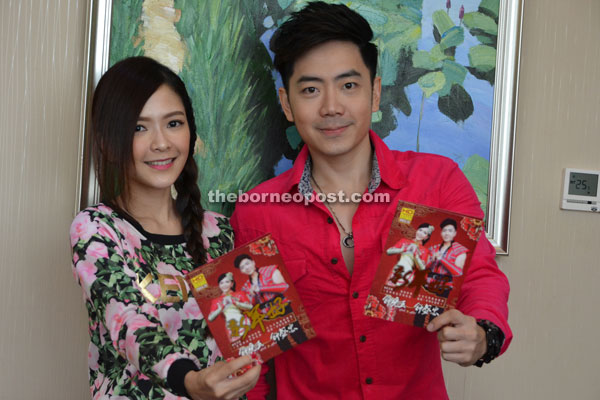 The 2015 CNY album is the second collaboration between the two siblings.

MIRI: Although it is roughly two months shy of Chinese New Year (CNY), the Chinese community, especially fans of locally renowned singers the ‘Chung siblings’ – Nick and Stella Chung, could get their hands on the newly released CNY album available in the market beginning today (Dec 8).

The album, themed ‘Great New Year’, has 10 songs, a few of which were composed by the multi-talented Nick, and sung by the siblings as well as featuring several local talents.

Speaking at a press conference yesterday, Nick revealed that the album offers a more colourful and joyful music video to bring out fans’ joyous mood during the festive season.

“There are more exciting storyline (in the music video), better props, more fashionable apparels compared to previous years. The new album also features local young talents from the latest movie ‘Bad Student 2’ in the production of the album.

“I am sure many of our fans would very much enjoy the album,” Nick said adding that they are confident of reaching at least 10, 000 copies sold locally.

“However, we were told that there are possibilities that next year’s sales of albums would drop about 40% compared to this year, due to several reasons including piracy and free online music portal.”

“Moreover, with price maintained at RM26.90, I am sure everyone could afford to own one for their collection,” the 34-year old singer said.

Voicing his disappointment over the boisterous piracy activity in the country, Chung hoped to educate the community to shun the pirated goods and support only original music.

“Each album is the result of the hard work musicians put in to present their music. Therefore, buying the original copies is a way to show our support to them,” he said adding that he appreciates his supportive fans over the issue.

The 2015 CNY album is the second collaboration between the two siblings.

After the press conference the duo held a meet-the-fans session at Bintang Megamall attracting hundreds of young and old fans lining up to buy the albums and had them signed.