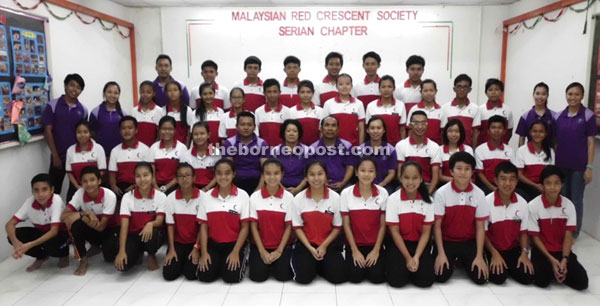 Phang (second row fifth right) with the participants and teachers-in-charge during the closing ceremony recently.

Attended by 45 participants from SMK Serian MRC Youth Leaders, the course was conducted at the MRC Serian Chapter’s Office from Nov 27 to Dec 2.

“The main purpose of this course is to provide a platform for the unit’s youth leaders to share their experience and knowledge in managing and enhancing their unit as well as their chapter’s reputation,” said MRC SMK Serian Unit teacher in-charge Phang Nyuk Lan in a press statement yesterday.

As the organising chairperson of the course, she added that a unit’s performance heavily relies on good teamwork among the leaders, members and teachers-in-charge.

“Leaders should also know how to cope and balance their time between their academic and co-curriculum activities,” she added.

During the closing ceremony a review of the unit’s achievement for 2014 was conducted which saw nine members of the unit awarded the national level MRC Certificate of Merit Award.

Also at the national level, two of their members bagged the Merit Service Medal Award.

Under the assessment by the State Education Department, MRC SMK Serian was the second runner-up for Best Uniform Body 2014 under the secondary school category.

At school level, a total of 21 members were awarded the Best Performance In Uniform Body Award.