Monday, July 4
You are at:Home»News»Sarawak»SOP subsidiary to launch condo project 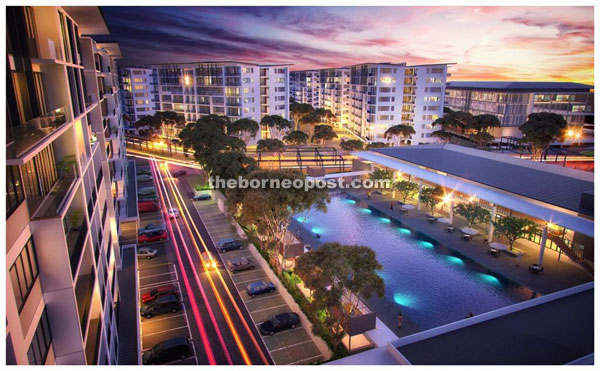 An artist’s impression of the Grand Residency’s clubhouse, viewed from a condominium’s balcony.

The Grand Residency project, aimed at offering city living that is comparable to metropolises such as Kuala Lumpur and Singapore, is targeted at young buyers seeking their first homes at affordable pricing.

According to the developer, the infrastructure development in the Miri Airport area has attracted many commercial as well as residential developments, making it a property hotspot with expected rapid growth in the coming years.

Capitalising on of the fast urbanisation there, the developer has decided to ink their first full-fledged shopping facilities attached to the condominium project near Miri Airport, which is in the southern part of the city.

Upon completion, the Grand Residency would have Olympic-sized swimming pool and a children’s pool, cafeteria and gym facilities, as well as tennis, futsal, basketball and indoor badminton courts, a 1.6km jogging track, pocket parks and BBQ area.

The residential development is also only a 15-minute drive from the city centre, and five-minute away from the airport.

In addition, SOP is also looking at having its six-storey corporate building here, costing approximately RM60 million, which it believes could be another landmark of the city in the near future.

Stretched across an approximately 11 hectares of land with nature and eco-sustainability in mind, Grand Residency condominiums are available in two-bedroom units from 1,415 square feet units, and three-bedroom ones from 1,942 square feet.

It also has the multi-generation concept design such as the five-bedroom units up to 3,200 square feet – perfect for larger families.

The development also stresses safety of residents with round-the-clock three-tier security system, card access system across main entry points, as well as security guards at the lift lobby and all floors.