Wednesday, August 17
You are at:Home»News»Sarawak»Good time for parents, children at Golden Child Camp 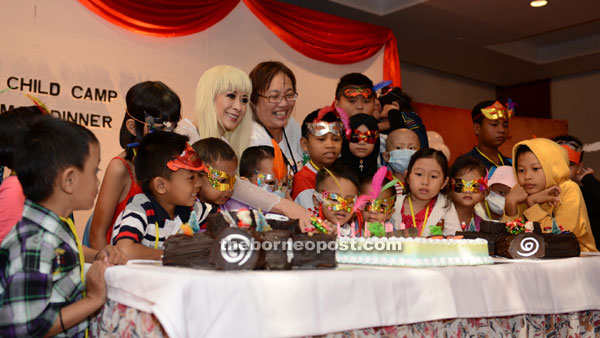 Lorna surprises the children by dressing as ‘Queen Elsa’, a famous character from the Disney movie ‘Frozen.

MIRI: Some 100 people from 32 families in Sibu, Bintulu, Batu Niah and Miri had an unforgettable time at the 6th Golden Child Camp (GCC) held here last weekend, where they enjoyed several programmes and activities.

The camp which kicked off on December 6 started with children’s activities that included cartoon movie marathon, whilst parents participated in the nutrition talk conducted by Dr Teh Siao Hean, the head of Paediatric Ward in Miri Hospital.

“The GCC is an important event in Sarawak Children’s Cancer Society calendar of event to provide the families an avenue to temporarily get away from the trauma and physical and emotional drains of the cancer treatment process,” organising chairman and head of Miri Liaison, Jocelyn Hee, told The Borneo Post.

“Parents were highly encouraged to participate in the talks, as it equips the families with the skills and information to provide better care for the cancer child,” she remarked.

The talk led by Dr Teh discussed on palliative care and the importance of treatment for palliative patients. This was followed by a topic on cancer medication and proper food intake by an oncologist from Miri Hospital.

The families were then treated to a pre-Christmas dinner at Parkcity Everly Hotel, where Datuk Lorna Enan Muloon, the wife of former deputy chief minister Datuk Patinggi Tan Sri Dr George Chan, gave a pleasant surprise to the children by dressing up as ‘Princess Elsa’, a character from the famous Disney film ‘Frozen’ while accompanied by snowman ‘Olaf’ to distribute Christmas presents to the children.

Also attending the dinner were Datuk Sebastian Ting Chew Yew who took time off from his busy schedule to meet the children and families, sponsors, donors and volunteers.

The charitable Ting had his head shaved to raise thousands of ringgit during the ‘Go Bald’ campaign in 2012.

On the second day, all the participants were led on a Zumba morning exercise, which was followed by a sharing session for parents.

According to Hee, the camp was meant to be a retreat for parents and children to rejuvenate their minds and refresh to battle against the disease.

“Thus, through parent-led sharing sessions we hope that families can connect with each other by sharing their problems and experiences, giving each other the emotional support as well as encouragement for them to brave themselves through the battle.”

On the public’s misconception on the camp, Hee reiterated that the camp was also meant to give the families opportunity to gather together.

“During chemotherapy treatment, usually the child patient can only be accompanied by a parent or a caretaker. It means for a long time the patient has to stay at the hospital, away from family members. Hence, the camp means so much for them to be at one place together,” she said.

Hee also took the opportunity to remind the parents of SCCS’ role as well as the public donations that support their children.

“Often, these parents do not understand the importance of our programmes like Go Bald and GCC. Either way, it is our responsibility to educate them on how SCCS works and where the money comes from so that they would be more appreciative.”

The two-day one-night camp was wrapped up with a buffet lunch attended by participants from both the Youth Camp and Golden Child Camp.

Formed in 1999, Sarawak Children’s Cancer Society is a non-profit voluntary organisation set up by parents of children with cancer to provide support to each other and their children.