Saturday, August 15
You are at:Home»News»Sarawak»Sarawak to be major player in MyFest 2015 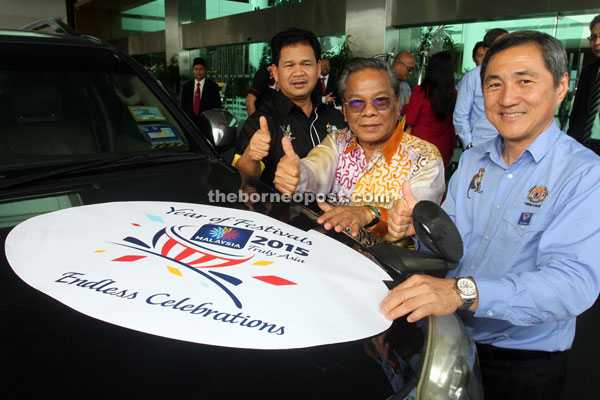 (From left) Pahon, Gramong and Ong give the thumbs-up after putting a sticker on an official car after the briefing yesterday. — Photo by Jeffery Mostapa

KUCHING: Sarawak will not only play host to at least 10 mega tourism events next year, but will be a major host to the 2015 Malaysia Year of Festivals (MyFest 2015).

According to Ministry of Tourism and Culture Malaysia (Motac) secretary-general Datuk Dr Ong Hong Peng, as MyFest 2015 would be the country’s biggest tourism event next year, he foresaw Sarawak playing a major role in making the event a success due to the attractions found in the state.

He was in town yesterday to attend a briefing organised by the ministry at a hotel here yesterday which was attended by most of the tourism and culture industry players in the state.

“This briefing was part of Motac’s effort to build up the promotion for this special celebration next year.

“We want them (tourism and culture industry players) from all around the country to know that this is the perfect time for them to work together with the ministry as we have a platform here to do so now in MyFest,” he added.

MyFest will complement the Malaysia Tourism Transformation Plan, through which the country has set a target of 36 million tourist arrivals with RM168 billion in receipts in 2020.

Ong added that the Malaysian tourism sector remained resilient despite the various challenges and Malaysia was still on the right track to achieve the Visit Malaysia Year 2014 target.

“MyFest is a national mission, it is envisaged that government agencies, the private sector, non-governmental agencies and industry players will come together and make the national campaign a success,” he said.

MyFest 2015 was announced by the Prime Minister in his recent 2015 Budget speech.

The campaign will continue to boost the tourism sector and maintain Malaysia as the preferred tourist destination with a target of 29.4 million tourist arrivals and RM89 billion in tourist receipts.