Saturday, August 15
You are at:Home»Columns»Nature Matters»Niah Caves — the ideal grotto 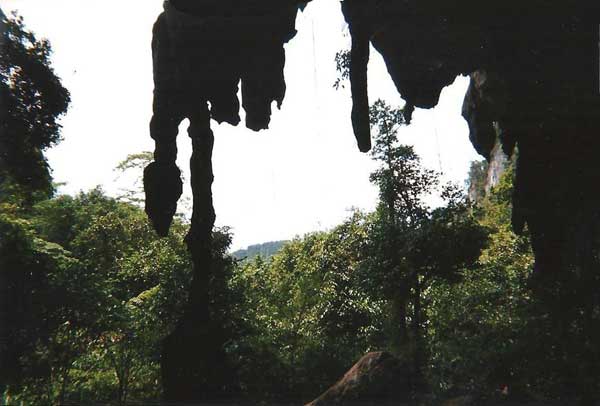 The spectacular entrance of Niah Caves.

AFTER 41 years in the teaching profession, including 16 years as a UK headmaster and another nearly three years in the same position in Kuching, I still remember my final interviews with the student editors of the respective schools magazines. “What is your ambition in your retirement?” My answer was simple: “To appear every Christmas as Santa Claus at the grotto in Harrod’s department store in London.”

“But why?” the students giggled and then listened carefully to my reply: “To see smiles on the faces of children.”

On a smaller scale, I have appeared for my grandchildren and neighbours’ guests knocking on windows and doors on Christmas Eve in the guise of Father Christmas with my padded belly and long cotton wool beard and a hearty cry of, “Ho, Ho, Ho!”, to persuade them to get into bed early so that I could deliver their presents when they were asleep! “Where are your reindeer?” the children would ask. I told them to look out of the windows on Christmas morning to see the wild red deer crossing the fields opposite my house. That said, Christmastide is about giving rather than receiving and the true meaning of Christ’s birth is often overlooked.

Unfortunately in my neck of the woods there are no true limestone caves to call my grottos. However every Christmas, as a geomorphologist, my mind immediately links to the most accessible cave system I have visited in the world — the Niah Caves, not far from Bintulu and Miri.

Much has recently been written in criticism of Tom and Barbara Harrison’s archaeological digs and discoveries at Niah between1954 and 1962, but only a few true archaeologists have recorded the lack of technological equipment they used compared with 21st century archaeologists today.

The Harrisons and their team dug with shovels and trowels. They were sponsored by Shell, for Tom was the curator of Sarawak Museum at that time. Much debate will continue to smoulder about their findings in terms of the ages of the artefacts, but we do know for sure through carbon dating that the skull of a 15- to 17-year-old youth is about 40,000 years old.

Neolithic axes, pottery and boats (wooden coffins) as well as Iron Age tools, ceramics and glass beads were discovered and it is likely that the caves were occupied by people from 40,000 BC right up to the 15th century AD. The rock paintings in the ‘Painted Cave’ are reckoned to have been created 1,200 years ago.

Of all the caves I have visited, in Carboniferous limestone in the UK, in the Mendip Hills of Somerset, in the Peak District of Derbyshire and in the Yorkshire Dales as well as caves in France, Malta and Slovenia, the Batu Caves in Selangor and the local Bau Caves, Niah Caves still top my list.

Why the Niah Caves? Unlike Santa’s grotto and the other show caves, they were not illuminated by up-lighting or spotlights in 1999. With a head torch you found your footing along the plank ways and with an upward turn of your head could see the 75m high roof.

The ammoniac smell of guano caused by bats and swiftlet droppings evaporated as one could observe the bats clinging to nooks and crannies on the roof of this Gunung Subis limestone cave.

To pass by the tents of present day troglodytes, whose income comes from harvesting the guano to sell as soil fertiliser and then to see the flickering candles and minute figures of men climbing up precariously constructed bamboo poles to harvest swiftlet nests for the bird’s nest soup satisfaction of the well-to-do, made me realise how fragile human life is.

Suddenly I was welcomed with a shaft of sunlight from above and a small waterfall with a minute rainbow. Fed by a sinkhole above the cave, the downward force of the water had over time caused the collapse of the cave roof.

Most massive limestones, as those of the Gunung Subis complex at Niah, are permeable, thus allowing water from overlying rocks above to find its way downwards vertically through joints when the limestone was lifted upwards by tectonic plate collisions from the seabed, which then contracted when it was high and dry.

Within massive limestones, horizontal cracks known as bedding planes also occurred as the uplifted limestone, with impurities in its bedding, dried out. In Malaysia, the rapid decomposition of vegetation together with high rainfall inputs and high temperatures allow the production of more aggressive acids to percolate downwards and thus the cave systems here are some of the largest in the world.

At some prehistoric stage in Niah’s history, there must have been a huge torrent of water in the form of a massive river running underground over the impermeable rocks below to create these enormous caverns. Today the effects of carbonic acid in the percolating water are clearly seen in the dripstone formations in the caves.

In tropical caves as in temperate caves, the temperature is pretty constant and the dripping water is evaporated, thereby releasing CO2, H2O and leaving behind ever growing deposits of calcite (Ca CO3). Hence the slow creation of stalactites and stalagmites, not unlike icicle formations displayed on European Christmas cards.

For me the most fascinating scene, which is indelibly inscribed in my mind, is that view just before I exited the cave entrance to see the oval shape of the cave with its dripstone formations highlighted by the sunshine and the rain forested slopes beyond. That for me is the magic of Niah. You will not see me this Christmas dressed in my Santa Claus outfit, welcoming families to the Niah grottos, but instead I shall be appearing, as such, in my hamlet.

Whilst keeping my wood burning stove fully fired and watching, as dusk falls, hundreds of rooks returning to their nearby rookery, I shall dream of heat and swiftlets returning to their nests in the nooks and crannies of the limestone walls at Niah just before the exit, through the cave system entrance, of thousands of bats. Do have a Very Happy Christmas and remember that giving is always better than receiving!

For fascinating family entertainment at Christmastide read the poem ‘Twas the Night before Christmas’ or other stories and poems at www.night.net/christmas. 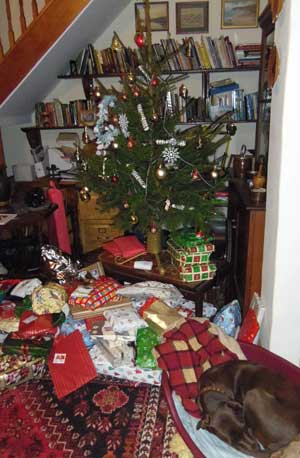 The writer’s dog Holly guards Santa’s deliveries in the UK.

Previous ArticleRTD offers free replacements for licences lost or damaged in floods
Next Article How much has changed since Herod’s time?