Saturday, August 15
You are at:Home»Features»Where giants and dragons roam 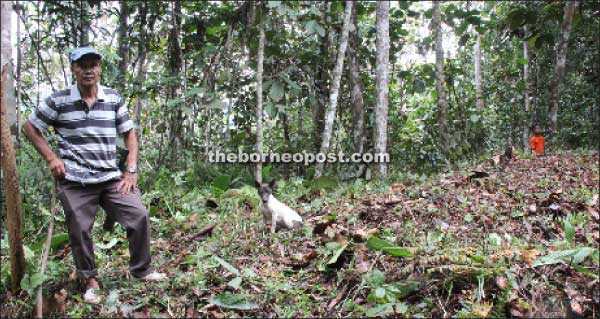 To show the length of a large earth crocodile located near his village, Dawat Barok of Kampung Long Tuyo stands on the head while his grandson stands on the tail end at far right.

SUPPOSE for a moment that the creatures and heroes which inhabit the legends and folktales we grew up with were true.

Traditional stories often reflect a certain amount of truth about a culture, the times its people were living in and how they lived.

Before writing became the norm in this part of the world, these stories and folktales were oral history and life skills lessons of sorts – imbuing the next generation with the knowledge they would need to live, while honouring elders and ancestors by remembering their contributions.

It is no different for the folktales of the Lun Bawang which have been handed down from generation to generation in Lawas.

Kampung Long Tanid headman Padan Ukab still remembers listening with great fascination to the stories told by his elders when he was a young boy, particularly those told by his uncle, the former penghulu.

“My uncle knew many of the stories by heart, so I learned much from him over the years until he passed away,” the 56-year-old recalled, when met at the village which lies about three hours’ drive from Lawas town.

From his uncle, Padan also learned about the genealogy of various local families and pantang harta (local observances governing property and inheritance).

The stories have provided him with in-depth knowledge of local history as well as Lun Bawang social and cultural etiquette – absolutely crucial for him in his role as headman.

Perhaps some of his uncle’s passion has also been passed on to Padan as he shares a similar penchant for regaling visitors with tales and legends of the feats of his forefathers, and how local landmarks came to be.

His depository of stories has also grown to include the recent history of the village, known for its scenic rice fields.

“We have lived at this present site since 1962 after a great flood that happened in the years after the Japanese occupation forced us to move.

“The water level was so high that almost all the houses were under water, except for one house and we only started planting Adan rice (a type of wet paddy prized for its aromatic qualities) around the 1980’s.

“We asked a logging company to use their heavy machinery to flatten the land around our village so that we could open wet paddy fields. Before that, it was very difficult to plant wet paddy as we could only rely on manual labour,” he explained. 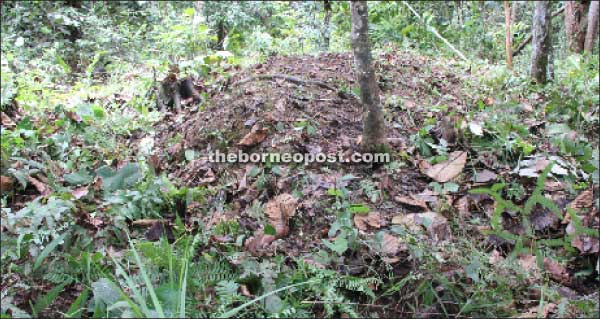 The size and shape of the earth crocodile near Kampung Long Tuyo is revealed once the underbrush has been cleared away.

Long Tanid resident and homestay coordinator Balan Berauk took thesundaypost to see the Batu Yung (translated as Yung Stone) – a unique stone feature, located just next to the old grass airstrip, once used to drop off and pickup supplies and passengers.

It stands on private property but we managed to get permission from resident Roland Baru to see the feature on the edge of a small slope just next to the house he stays in.

According to popular local belief, Batu Yung was one of the locations where a prominent warrior in Lun Bawang folklore called Upai Semareng would stop on his travels to and from Indonesia to refresh himself and sharpen his parang or machete.

Long Semadoh, of which Kampung Long Tanid is a part of, lies very close to the borders of Sabah and Kalimantan, Indonesia – demarcated by mountain ranges and rivers – so traditionally, there have always been close ties between the residents due to shared cultural and familial origins.

Long Semadoh was and is still an important transit point for visitors from the North and East of Borneo on the way to visit family and friends in Ba Kelalan and Bario.

Upai Semareng was a warrior of great strength, mostly likely a giant as the parang he wielded was larger and heavier than those belonging to other men.

Batu Yung consists of three large stones in a straight line, of which two are rectangular in shape and almost perfectly flat.

One of the flat stones is known as Teng (translated as Eating Place or Dining Table) and was thought to serve as Upai Semareng’s table where he ate his meals and entertained visitors.

The other flat stone which appears to bear weathered scratch marks is called Batu Lan, which the warrior used as his sharpening stone. The third stone just next to Batu Lan was thought to be the seat upon which the warrior sat as he sharpened his parang.

A jar hollowed from a single block of stone which sits between Teng and Batu Lan is a more recent addition to the feature.

Many years ago, Roland’s father found it buried in the ground as he was building a fence just a stone’s throw away from Batu Yung.

He decided to move the stone jar next to Batu Yung so that it would be easier to keep an eye on them. 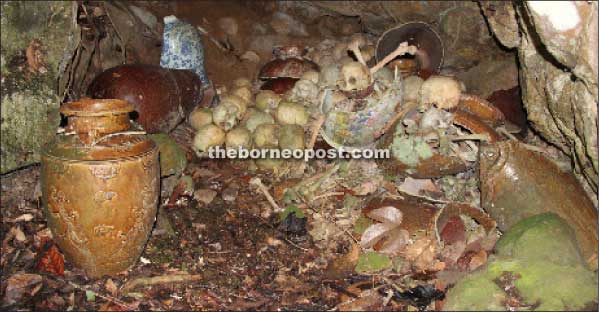 About 20 minutes’ walk away on a small hill with a scenic view of rice fields and in the shadows of a large moss-covered boulder is an old burial ground about several hundred years old.

To get there, one must pass through two more recent cemeteries, one which was built during pre-Christianity times while the other is still being used today.

The remains of broken tajau (antique ceramic or clay jars prized by many Sarawakian ethnic tribes) sit at the foot of the boulder, lining the narrow path leading to a small cleft in the rock face where human skulls and bones have been reverently arranged.

In the past, when a person died, their bodies were not buried but either wrapped in bark cloth or placed in wooden coffins, depending on the wealth and social standing of the deceased, according to Balan.

When the body had decomposed, the bones were cleaned and placed inside a tajau together with some of the deceased’s earthly possessions to ensure a comfortable after-life and brought to the burial ground for their final internment. This second burial was usually reserved for elite or wealthy individuals.

However, valuables such as beads and precious metals, often placed inside the tajau as well as the jars themselves, soon attracted the attention of grave robbers.

To prevent further theft and desecration, the villagers broke the remaining tajau and removed the bones inside to the hollow in the rock.

According to Balan, a few of the skeletons discovered at this burial ground appear to belong to individuals larger than the average size of the present villagers, providing an interesting footnote to the local folklore of giant warriors who once passed through the land. However, this possibility has yet to be scientifically ascertained.

For hundreds of years, up until the last century, the Lun Bawang were embroiled in civil bloodshed as the various villages vied for dominance and influence over each other.

In gruesome games of tit-for-tat, the score was kept, based on the number of enemy heads warriors brought home.

The more enemies a warrior beheaded, the more esteemed he was in the eyes of his fellow men and the more honour he would be bestowed. To this end, sometimes men would volunteer to be sent out on raids in order to better their fortunes and standing within their community.

A large crocodile effigy made of earth would be built to mark each victory and a feast held in the warriors’ honour.

The heads of their enemies would be displayed and taunted. The returning victors were given a hero’s welcome and could have the choice of any womenfolk they wanted.

Many of these crocodile effigies can still be found across Lawas today. One specimen can be found about 20 minutes’ walk from Kampung Long Tuyo – two hours’ drive by gravel and dirt road from Lawas town – across an old but still well-kept grass airplane strip, up the slope of a hill directly opposite the village, past a buffalo grazing ground, and through fruit gardens belonging to villagers.

According to resident Dawat Barok who took thesundaypost to the site, this one has weathered the ravages of time and nature better than the other effigies in the nearby areas.

From head to tail, it appears to be about 18m to 20m in length, with the outline of the head, tail and legs still quite clear to the naked eye once the surrounding brush had been cleared away.

Dawat is unsure how old this particular effigy is but he thinks it could be quite recent as less than 200 years ago as headhunting was still being practised in the area during his grandfather’s time. 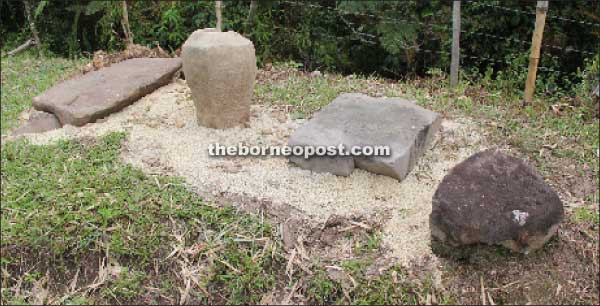 Batu Yung where warrior Upai Semareng is believed to have rested and sharpened his parang while travelling to and from Indonesia.

If it can be said many people know of the existence of earthen crocodiles in Lawas, only a few are aware of the earth dragons or serpents. There is a Darung Tanah (large snake or dragon) not far from Kampung Long Kerabangan at Long Semadoh.

The site is accessible by foot from the main road but it requires about a 15-minute walk over unmarked, uneven grounds through well-fertilised buffalo grazing pastures. However, the effort is well worth it.

This serpentine effigy is one of the largest earth effigies discovered in Sarawak so far. It measures 90-feet long and nine-feet wide, according to a laminated information sign at the site.

Unlike other effigies found at Long Mio, Ulu Padas, Sipitang and Laman Luak, Long Tanid, which were commonly made in a coiled pattern (kelabung), this particular one is shaped in a slithering pose (semeloi) with its head pointing towards a river.

It was said to have been constructed in 1900 by two brothers and community leaders Ukong and Dayung Kelupan after they eluded arrest and survived the Ulu Trusan Expedition, led by Charles Vyner Brooke.

It is rather unfortunate that outside of Lawas, not many locals are familiar with Lun Bawang culture aside from what they know about Bario and Ba Kelalan.

More need to be done to discover, study, protect and promote Lun Bawang history and heritage, especially to the younger generation, before it gets lost in the march towards development and forgotten in throes of urbanisation.

The good news is that it is easier to do something about it now when the window to act is still open and accessible, but as always, time and political will is of the essence. As the saying goes, prevention is better than cure.

Previous ArticleChanging of the seasons
Next Article Timber industry – a public enemy?