Friday, October 7
You are at:Home»World»500 illegal workers from Indonesia deported from Malaysia 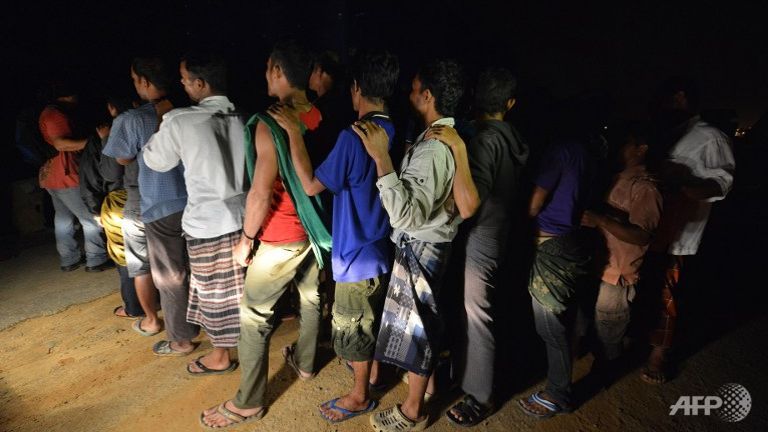 Illegal workers being rounded up in Malaysia. (Photo: AFP/Files)

SUBANG, Malaysia: Malaysia on Tuesday (Dec 23) deported nearly 500 undocumented Indonesian workers, in what analysts said was part of a push to clamp down on illegal labour as the economy starts to slow.

The workers were brought in shackles to Subang Airport west of Kuala Lumpur, where Indonesian officials said they would be loaded onto military C-130 aircraft to be flown to their native country. Another 200 will be deported on Wednesday, Indonesia’s ambassador to Malaysia Herman Prayitno said, adding that more illegal workers may be sent back next year.

Muhammad Arifuddin, who worked as a labourer in construction for four years in Malaysia before being arrested, said he hopes to return to seek legal employment. “I will try to get the legal documents and return to Malaysia to work,” the 36-year-old told AFP.

Malaysia draws migrants from across the region and even from South Asian nations such as India, Nepal and Bangladesh. More than 6 million foreign migrants, most of them illegals, are thought to work in factories, plantations, restaurants and in other jobs largely shunned by more affluent Malaysians.

But Yeah Kim Leng, dean of Malaysia University of Science and Technolgy, said it looked like authorities were clamping down on illegal workers as growth has started to slow. “The Malaysian economy is softening. The deportation of the illegal migrants seems to coincide with the economic slowdown,” he told AFP.

Kuala Lumpur in October forecast solid economic growth of between 5 to 6 per cent next year, but the World Bank recently trimmed its forecast to 4.7 per cent, citing lower exports and weaker commodity and oil prices. – AFP