Monday, January 30
You are at:Home»News»Sabah»292 evacuated in Beaufort; 395 return home in Tenom
For the freshest news, join The Borneo Post's Telegram Channel and The Borneo Post on Newswav. 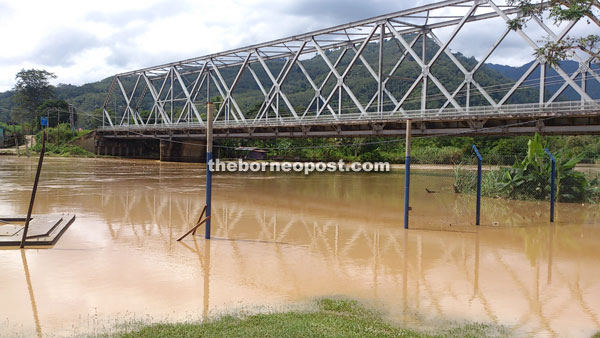 The water of the Padas river beginning to subside at 3pm yesterday.

KOTA KINABALU: The flood situation worsened in Beaufort but improving in the interior districts of Tenom and Kemabong yesterday.

A total of 292 flood victims from 111 families were evacuated to Dewan DSP Hj Mohd Dun Beaufort as the water level at the Padas River had exceeded the danger level at 9.15 metres yesterday afternoon.

At the same time, the old shop lots in Beaufort, including three schools, namely Beaufort Middle School, SJK(C) Kung Ming and Kung Ming Kindergarten, were immersed in one to three feet of water.

It was learnt that the Padas River began to swell at 4pm on Monday, causing muddy water to overflow to the lower grounds in Beaufort. By 5pm, the whole town area in Beaufort and surrounding villages were inundated with flood water, cutting off traffic flow.

“We just finished repainting the classrooms two weeks ago to welcome new students.

“We did not anticipate the flood, now we have to do it all over again.”

Liew said he still had to trudge the muddy water to carry out administrative work at school today.

In Tenom, ten of the 11 flood evacuation centres were officially closed at 3pm yesterday and 395 flood victims returned to their homes as the flood situation in the district improved.

The weather in Tenom and Kemabong also improved yesterday.

District Officer Madiyem Layapan yesterday said 395 of the 414 flood victims who were evacuated to the centres on Monday, were allowed to return home yesterday afternoon.

“Only 19 victims from three families are still at the evacuation centre at the Cultural House in Kampung Naluyan because the flood water is still at the danger level,” he said at the district office flood operations room here.

Madiyem said the District Natural Disaster Committee sought advice from the police and Fire and Rescue Department before the victims were allowed to go home.

“We only allow victims to return to their homes after getting confirmation and advice from the police regarding their safety,” he said, adding that there was no report of untoward incident.

Madiyem added the flood operations room was still open 24 hours as a precaution in view of the unpredictable weather condition and villagers were advised to contact 087-735447 for further action.

Meanwhile, political secretary to the Infrastructure Development Ministry, Stanis Baundi who also visited the flood-hit areas, said six villages were affected by the flood on Monday.

“One of the worst hit is a church that is under almost one meter of water and has to postpone the Christmas celebation this evening (December 23).

“Flood waters at Pegalan and Padas rivers have subsided,” he said.

Stanis advised villagers staying in low-lying areas to follow instructions of the authorities to evacuate early to safer areas or flood relief centres.

In Kudat, the Fire and Rescue Department used a lorry, a Land Rover vehicle and boats to rescue flood victims at Kampung Bak-Bak.