Thursday, August 11
You are at:Home»Columns»Uncle DI»A prayer for common sense 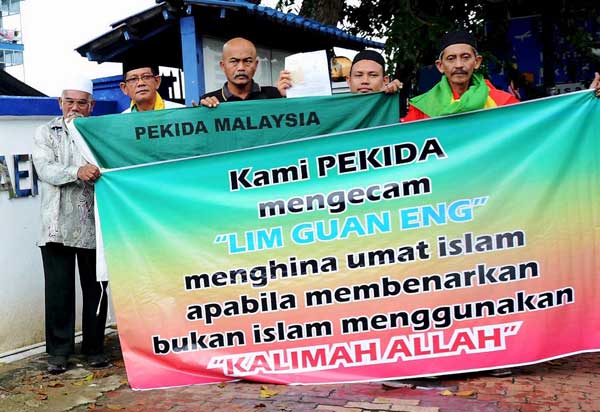 One of the combo file photos shows supporter of the Pegida movement holding a sign that reads ‘Ready to Go About, PEGIDA rocks Germany’ during a rally in Dresden, eastern Germany (left), while another depicts members of the Alor Setar branch of Pekida protesting against Guan Eng, who has allegedly issued a statement to allow non-Muslims in Penang to use the word ‘Allah’. — Agencies 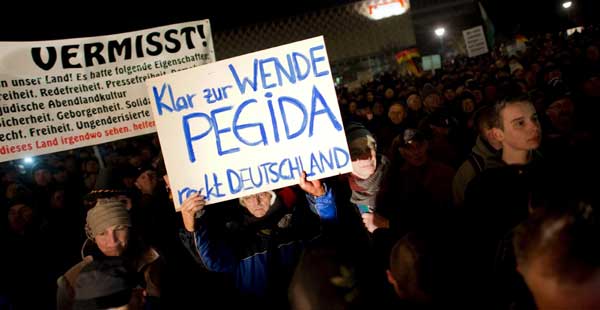 TWO acronyms made from two different languages of people thousands of miles away from one another are strikingly similar!

These are Pegida and Pekida.

The former is German, standing for ‘Patriotische Europäer Gegen die Islamisierung Des Abendlandes’ (Patriotic Europeans Against Islamisation of the Occident), while the latter is from our own national language – Pertubuhan Kebajikan dan Dakwah Islamiah Malaysia (Islamic Welfare and Missionary Organisation — the English translation is mine).

One cynical friend, when told of this near coincidence, concluded that perhaps there could be a relationship between the two. He reminded me of the Nazi Germans’ belief in the existence of a pure and superior race – the Aryans. That’s them.

But I had to interrupt my friend in his lecture. There is no such thing as a superior race in Malaysia. He was adamant that there was, or at least there were some people who thought so.

“Just read the papers,” he said,  “Surf the Internet to see how some misguided Malaysians are striving for ‘supremacy’ in many things including religious and racial privileges.”

Pegida and Pekida have diametrically opposing agendas. The German far-right outfit wants to keep Islam out of the West by organising street protests and singing Christmas carols.

Obviously, in an effort to fast-track the case, pressure was put on the Attorney-General by Pekida leaders. They brought a copy of the report to his Chambers so that the Chief Minister would “respect Islam to avoid quarrels between Muslims and non-Muslims” and so “that he would not use the issue as political capital”.

The Herald case at the Court of Appeal level has been variously interpreted, mainly by people who don’t understand the law in the first place. And those conflicting interpretations have caused much pain and anguish. The case of hymn books meant for Orang Asli in Johor is another example of how ignorance eventually breeds trouble.

The Ten Point Solution formulated by the federal cabinet, being an administrative policy, is no solution in the long-run for the Christians in Sarawak and Sabah. It makes us feel safe from prosecution but even that is at the pleasure of the religious authorities, as if we were in a theocratic state. What Sarawak and Sabah need is a new law to guarantee the people’s right to practice their religion without let or hindrance – to reinforce the provision of the Federal Constitution.

At the moment, we are not sure whether it is safe to use the word ‘Allah’ in our religious activities. And the reason why we pray in Bahasa Malaysia, therefore use ‘Allah’, is not of our own choice. It was imposed on us by the National Education Policy about one generation ago.

My wish for New Year

I wish that the Federal Court would decide on the question as soon as possible whether or not the Christians in Sabah and Sarawak could legally use the word ‘Allah’.

Do they risk being reported to the police and the Attorney-General if found to have uttered the word ‘Allah’ in Penang? They may be in trouble with the law if the Chief Minister confines freedom to use the word to Penangites. This assumes that he has the right to issue a statement to interpret the Penang Islamic Religious Administration Enactment 2004 correctly.

Otherwise, all will be violating that enactment unless they stop praying. And if they do that, worse luck, they will be in violation of the first principle of the Rukun Negara – ‘Having Belief in God’.

Seriously, do we need official license and permission just to pray? How ridiculous can that be!

Malaysia is already the laughing stock of the educated world. Christians in the Arab countries pray to Allah as a matter of course. We are a moderate and sensible nation in most cases. The extremists and the bigots are in the minority but they get the most publicity. Blame the media – at least some of them.

Whatever happens, pray in your own country ‘bah’. Indeed, pray for the country itself – for wisdom for its leaders, for God’s guidance to the religious bodies, for common sense for its politicians; as well as for the bigots, racial and religious fanatics to come down to Earth and share in the peace that the season brings.

Comments can reach the writer via columnists@theborneopost.com

Previous ArticleOnce bitten, twice shy!
Next Article The Hope for 2015