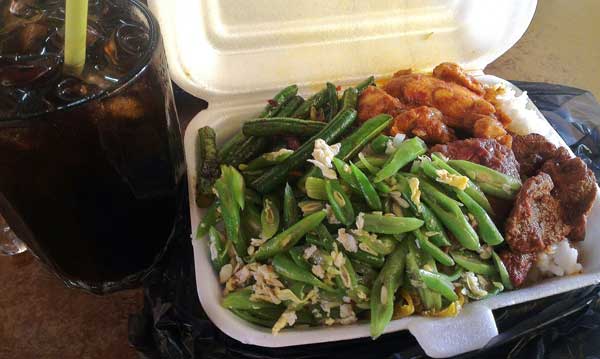 Styrofoam containers can leach out toxic dioxin into warm food or drink, posing health threats to the gastrointestinal tracts and kidneys and even more dangerously, the toxin is carcinogenic in nature.

SIBU has marked a milestone in environmental preservation by becoming the first town in Sarawak to ban polystyrene – or more known as styrofoam – takeaway containers.

Effective Jan 1 this year, styrofoam meal boxes which eateries have been using for three decades, have all but vanished from food stalls, coffeeshops and restaurants across town – to be replaced by bio-degradable paper boxes.

The Sibu Municipal Council (SMC) have been working with local food operators for nearly two years towards achieving this zero-styrofoam target; and their indefatigable ‘greening’ efforts have earned them the reputation as being the most successful among other councils in the state in such endeavour.

For years, it has been working with non-governmental organisations (NGOs) to raise awareness among the townsfolk of the benefits of composting or making natural enzymes from organic food waste which in turn, could flourish home gardens.

The townsfolk have also been encouraged to reduce the use of plastic bags, practise the 3R (reduce, reuse and recycle) and segregation of refuse to cut down landfill waste, recycle e-waste, as well as to continue observing the annual Earth Hour in March and Love Earth Day in April.

The council held dialogues with food operators in implementing the ban against styrofoam containers, apart from introducing it on a trial basis during last year’s Borneo Cultural Festival and other major food fests and also bringing the idea to schools, kindergartens and social organisations as well as educating the public through the media and forums.

The announcement on the ban came in July last year – which SMC felt was the right time for the implementation.

The then-deputy chairman Daniel Ngieng pointed out that the council was determined to enforce the ban, stressing that it would deal firmly against those defying the regulation.

He reminded food operators: “The ban will be a clause under the licence of all eateries. There will be two warnings for offenders – come the third offence, their licence will be revoked.” 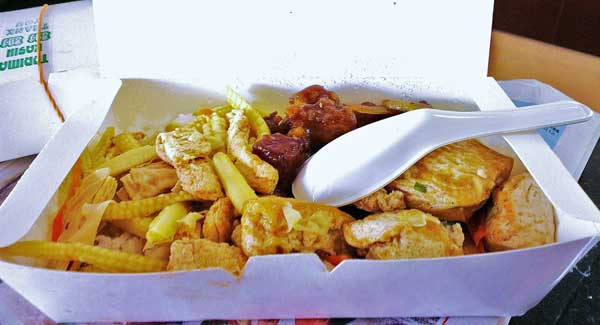 When the ban came into effect on Jan 1 this year, it earned praises from environmental conservation groups, including the World Wide Fund for Nature (WWF) Malaysia.

“We’re pleased that Sibu is taking this initiative – the first in Sarawak. It is not only benefitting the community, but is also a noble act towards environmental conservation. Banning polystyrene is how society can play its communal role for the environment,” he said.

Deputy Natural Resources and Environment Minister Datuk Seri Dr James Dawos also gave his support for the initiative, adding that styrofoam packaging should not be used at all because it could adversely affect people’s health and the environmentin view of it being a by-product of petroleum containing hydrocarbon.

Dawos, a former state environmental advisor, pointed out that styrofoam containers could leach out toxic dioxin into warm food or drink, posing health threats to the gastrointestinal tracts and kidneys and even more dangerously, the toxin was carcinogenic (cancer-causing) in nature.

“Polystyrene packaging is also environmentally-unfriendly because it takes (five) centuries to biodegrade. It’s is even more poisonous than plastic bags because when hot, it (styrofoam) releases dioxin more quickly.”

Adding on, Dawos said most developed cities around the world had already banned such packaging.

Meanwhile SMC secretary Hii Chang Kee said the council was determined to work with the people to ensure the success of the ban.

“Our long-term objective is to create a friendly environment for future generations.

“According to our contractors, lots of drain blockages are caused by styrofoam containers being thrown into them. These containers also collect water and in turn, become breeding grounds for mosquitoes.”

The SMC has reasons to worry about the accumulation of waste in their Kemuyang landfill, noting that nearly 30 per cent of the dump are plastic materials inluding polystyrenes, as well as paper products and paper boards. 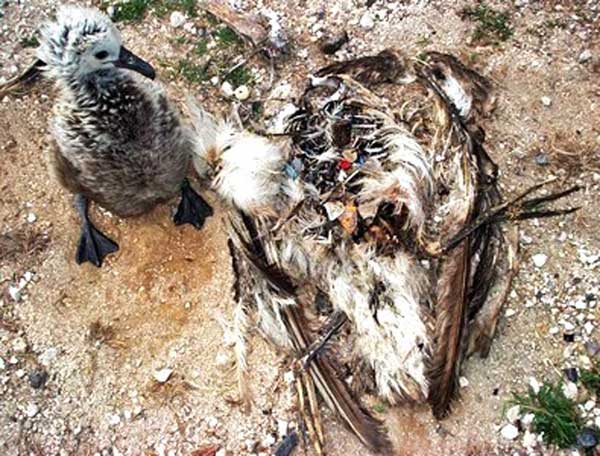 A chick looking at the carcass of another bird, which died after having mistakenly eaten plastic and polystyrene waste.

The participation of food operators and members of the public in the polystyrene-ban movement has been encouraging.

Food operators had already switched to using paper takeaway boxes one month before implementation of the ban, as a way to acclimatise their customers to the change.

“Surprisingly, public response was encouraging. If you want to save costs, (you should) bring your own (non-polystyrene) containers.”

So far, he hasn’t received any negative feedback.

It seems that SMC’s effort in banning styrofoam packaging has sparked a chain reaction.

On Oct 2 this year, neighbouring town Sarikei took the bold step in launching their ‘Say No to Polystyrene For Packaging of Food’ campaign in response to concerns over the health hazards and negative environmental effects caused by polystyrene.

Sarikei District Council (SDC) chairman Chan Phan Chan said: “For the good of the community and the environment, we discourage the use of polystyrene materials. As the authority entrusted with overseeing the operation of local eateries, SDC is duty-bound to ensure that food operators would strictly comply with food safety regulations.”

The SDC now requires all food operators to use bio-degradable materials for takeaway packs.

Sibu Rural District Council (SRDC) followed suit. On Oct 18, it launched a similar drive against the use of polystyrene for food packaging.

SRDC deputy chairman Oliver Kuo said notices were sent to food and drinks operators a month in advance, adding that they were allowed to use up the remaining polystyrene packs.

“By 2015, there will be no more polystyrene meal boxes in Sibu Jaya as well as in Selangau.”

Kuo said just like SMC, SRDC had also identified styrofoam packs as the main cause for blocked drains.

SRDC’s jurisdiction covers the outer parts of Sibu, including the villages along the west bank of Sungai Bidut, the new township of Sibu Jaya and the hinterland town of Selangau.

It appears that with implementation of the ban by both councils, the prohibition against the use of polystyrene food packaging in Sibu is total.

Dr Henry Chan hopes that other town councils and local governments across the state would emulate SMC’s effort in replacing polystyrene packaging with alternative ones made from recycled paper and bio-degradable products, as well as encouraging customers to bring their own food containers. 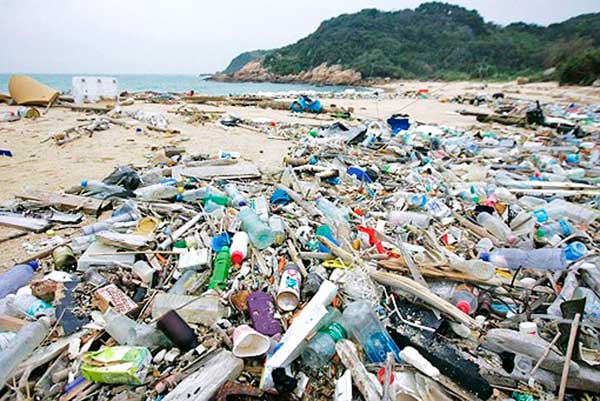 A beach along an island in the Pacific, miles away from human habitation, is littered with polystyrene and plastic waste that have been washed ashore.

THE use of polystyrene or styrofoam meal packs is still frustratingly extensive in Sarawak because only three local councils have enforced the ban against them. This means over 90 per cent of the population across the state are still using polystyrene packaging.

If you are one of them, think of the consequence on you and the adverse impact you are building for your children:

l You’re adding polystyrene waste to your home space for the next 500 years because that is how long it takes for it to compose.

l You are adding to the 46,000 pieces of floating plastic per square mile in the ocean when the items you throw away flow to the sea. The latest figure in PLOS ONE journal shows that an estimated five trillion pieces of plastic, including polystyrene items weighing altogether over 250,000 tonnes, are floating around the world’s oceans. They will stay there for the next 500 years, unless they are mistakenly consumed by sea creatures, which will eventually kill them.

l You are adding to the 30 per cent of non-biodegradable waste in the landfill.

l You are eating poison because polystyrene contains toxic substances, styrene and benzene. You face the risk of getting cancer and suffering from neurotoxins. Hot food and liquids cause styrofoam to break down. Styrene, then, enters your bloodstream and tissues.

The accumulation of the residues in the brain, spinal cord and peripheral nerves causes acute or chronic functional impairment of the nervous system. You will suffer from depression, headache, fatigue, weakness as well as effects on kidney function and blood.

Banning polystyrene food packets is just a tip of the iceberg when it comes to the array of green solutions to address global plastic pollution. Nevertheless, taking the first positive step means that half the battle is already won.