Monday, January 30
You are at:Home»Columns»How I See it»The Hope for 2015
For the freshest news, join The Borneo Post's Telegram Channel and The Borneo Post on Newswav. 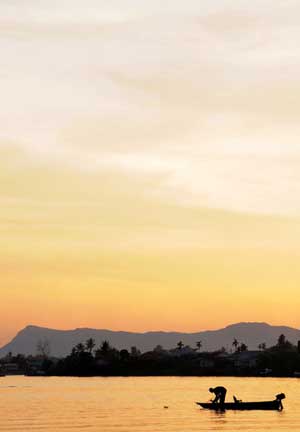 Hope is flowing like a river – flowing out through you and me. — Beautiful Sarawak river by Evangeline Thian

IT is another Eve of New Year. We are again coming to the crossroad. Our nation stares at the uncertainties and challenges as the new year 2015 looms large.

Our Malaysian Ringgit is free-falling – to more than 3.50 against the US dollar. The loss is more than 11 per cent against our recent record of RM3.146 to a dollar on Aug 28, surpassing the lowest level more than five years ago.

As a net exporter of petroleum, our country is also hit by the sliding global oil price of less than US$70 per barrel, compared to the year-high of US$115, down more than 40 per cent.

Prices for our other major exports such as liquefied natural gas and crude palm oil have also fallen substantially.

For a Malaysian consumer, the falling oil prices do not translate into a fall in price of goods in the market.

Conversely, goods are beginning to price upwards as producers are pricing in the higher costs expected next year with the implementation of Goods and Services Tax (GST) from April 2015.

It is surprising the country’s highest leadership – the Prime Minister – seems unperturbed.

He backtracked on his promise to abolish the Sedition Act and appeared to shelf the proposed affirmative National Harmony Act before he left for an overseas trip.

There is heightened inter-racial and religious tension among the populace, most probably to distract the subjects from questioning the fundamental issues of corrupt practices, leakages, wastages, mis-management and poor governance.

The MACC appears to be camping in Sarawak as it is the only state in the country that is canvassing and executing integrity pledges and confronting corrupt practices over the past months.

But, as is with many other Malaysians, I am heartened by the open letter, jointly written by the group of 25 Malay and Muslim former top civil servants, judges, ambassadors and scholars, calling on the Prime Minister to show leadership and moderate Malays to speak up.

They have also expressed their belief in the need to call for consultative process that will bring together experts in various fields, including Islamic and constitutional laws, and those affected by the application of Islamic laws in adverse ways.

Naturally, the joint letter irked the leaders of Perkasa and Isma and crude words were used against the group of 25 by these people. They persist to claim they represent the majority of a single race.

Former Malaysia ambassador to the Netherlands, Dato’ Noor Farida Ariffin, a member of the Group of 25, did not mince her words when she dismissed their (Perkasa and Isma’s) claim: “These two groups clearly have low standards, are poorly educated, intellectually challenged, incapable of seeing their own racism, intolerant, blindly obedient and are destroying the fabric of our society.”

That forthright statement has certainly exculpated all Sarawakian Malays and I can safely vouch for them all and say Perkasa and Isma do not have any representation in Sarawak.

The racists and bigots have had their days and their say in much of 2014, and they are bringing the country down with them. Will the Group of 25 which have seen numerous Malaysian groups and individuals coming out openly to support them, wake up the moderate and silent majority of Malaysians?

A People’s Movement Against Racism, led by a moderate PAS parliamentarian Dr Mujahid Yusof Rawa and many moderate Umno leaders, sidelined by the race-based party, is also being initiated to counter extremism and racism in Malaysia.

Across the country, Malaysians from all walks of life are registering their faces in campaigns to “Support the petition of the 25 prominent Malays,”– I am No. 26, I am moderate – and the likes.

A strong force of Malaysians has come forward, defying the grinches of Perkasa and Isma which thought they could steal the Christmas and new year parties from us.

There is hope. The voices of the moderates will promote unity among Malaysians and thereby, the country can endure the immediate uncertain future.

However, let not “moderation” be a mere slogan. Malaysians must propagate and practise moderation in the same manner as Sarawakians are living their lives. Indeed, moderation is our way of life, one of the hallmarks of a peaceful and harmonious multi-racial society.

In his first Chief Ministerial winding-up speech at the State Assembly this May, Chief Minister Datuk Patinggi Tan Sri Adenan Satem declared: “I want to make it clear here in this august House that hudud law will not be implemented in Sarawak and that no Bibles will be confiscated in Sarawak.”

This was greeted with the table-thumping of the whole Assembly, debunking the taboo that “a Muslim will not openly voice against the enforcement of the Hudud law.”

Adenan’s statement was widely cheered by all quarters when it was published. There were no protests from right-wing groups to force the lockdown of Wisma Bapa Malaysia, or the Sarawak State Assembly building.

There are, and always will be provocation, relentless trial and tribulation but Sarawakians are always ready to show the way to persevere and overcome extremism with their customary moderation.

I am, of course, referring to the exemplary statement by Datuk Bolly Lapok, the Archbishop of the Anglican Province of South East Asia, and his colleagues of the Association of Churches in Sarawak (ACS), reiterating the Association’s stance to welcome the release of the 351 confiscated Bibles and Gospels According to St Luke, which contain the word Allah  to ACS and expressing regret regarding concerns raised in media reports over the stamping of Bibles containing the word Allah.

These Sarawakian elders of churches could have voiced their displeasure over the regrettable stamping of the Bibles but the resultant squabbling would only develop into a protracted controversy.

Those quarters, including Perkasa and Isma, must have hoped the stamping of 30 Bibles will blow up a storm and serve their purposes but they are roundly defeated as Datuk Bolly Lapok and the elders in ACS whose faith have given them the characters of identity, and the stomach to persevere and content any cynic and detractor.

The 30 Bibles stamped are most likely flown into Sarawak and are in different parts of the State, serving their sole purpose of enlightening the Christian followers.

Without these 30 Bibles, I am sure it will not stop Sarawakians on the other shore singing aloud that “Allah gave life to humankind, therefore sing heartily, in joy and glory.”

The customarily moderate Sarawakians of all faiths have, through their practice, made it so easy to call for all to go forward together to build a future for our nation.

It is the common teaching of all faiths that unity does not mean our differences are erased. Rather, we embrace the differences and we move forward.

The moderates are the hope this country needs, and Sarawakians are showing the way.

With the message of hope and unity, let us welcome the new year 2015.

Previous ArticleA prayer for common sense
Next Article PT3 a move in the right direction?