Sunday, October 2
You are at:Home»News»Sabah»Yahya wants agencies, depts to double efforts in 2015 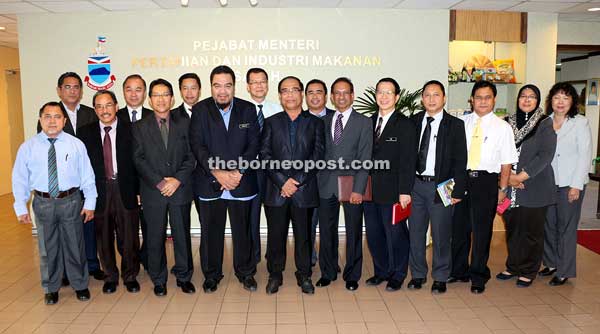 KOTA KINABALU: Deputy Chief Minister Datuk Seri Panglima Yahya Hussin wants all agencies and departments under the Agriculture and Food Industry Ministry to continue improving their services to the people, next year.

Yahya, who is Agriculture and Food Industry Minister, said improving their performances must be the main agenda of all the ministry’s departments and agencies, as well as all the objectives of all their officers and staff at the district and divisional levels.

During the last meeting for 2014 with the ministry’s department and agency heads at Wisma Pertanian yesterday, Yahya said he was satisfied with what they had achieved in terms of management and development during the year.

“But there is room for improvement and I would like to see your efforts double in 2015. For programs which were not finished this year, there is a need to study and review the level of achievement so that it can be improved next year,” he said.

He also reminded them of their responsibility to frequently go down to the ground to monitor development programs that are implemented at village and district levels.

They must also keep an eye on their officers as well as personnel to ensure that they carry out the duties and responsibilities given to them by the government, he stressed.

Yahya also congratulated the departments which had received awards in recognition of their good performance and quality of management.

Among the departments was the state Agriculture Department which had successfully renewed its MS ISO certification for another three years as well as being awarded the ‘Anugerah Kecemerlangan Pengurusan Kewangan 4 Bintang Indeks Akauntabiliti Tahun 2013’ and ‘Anugerah Inovasi Ketua Menteri (Harapan dan Potensi) 2013’.

“The success of the departments and agencies should be emulated by others who are heading towards the same direction. The ministry will continue to work hard so that all its plans and policies will be implemented successfully towards increasing the achievement of the state’s agriculture and food industry sector,” he said.