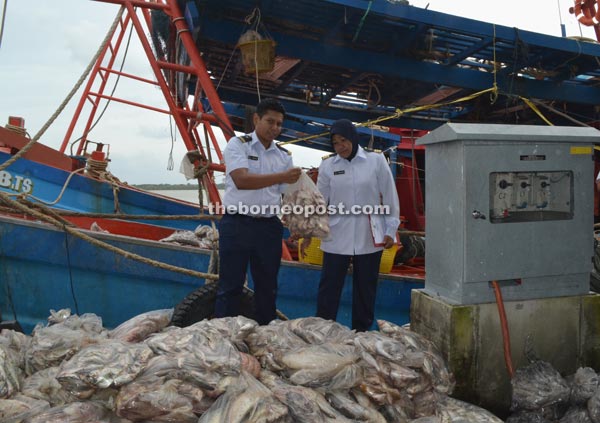 KUCHING: About 7,000 kg of fish worth RM31,560 were seized from two foreign trawlers believed to be from Vietnam on New Year’s Day.

Malaysian Maritime Enforcement Agency (APMM) Kuching District maritime commander Hariani Mahmood said the raid on these trawlers were made after receiving a tip-off from local fishermen.

She revealed the trawlers, with registration numbers KG.94518.TS and KG.94519.TS, were stopped at a location 24.6 nautical miles from Tanjung Sipang.

“We seized about 7,000 kg of fish believed to be caught in our country’s waters using a trawl called ‘pukat ganding’ which has been banned. The seized fish was estimated at RM31,560.

“The two captains and 25 crew members have been detained to facilitate investigation,” she told reporters here yesterday.

She disclosed that the case is being investigated under Fisheries Act 1985. If found guilty, the vessels will be confiscated while the captains and crew members can fined up to RM1 million and RM10,000 each respectively.

On a related matter, she said APMM Kuching will continue to look out for foreign trawlers in the country’s waters. She added such activity if left unchecked will lead to economic loss for the country.

She encouraged the public to relay any information on such clandestine activity to its operations room at 082-432544 or directly call 999.