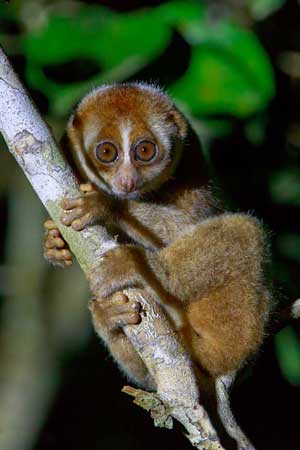 Slow lorises have big eyes, set on a pleasant and seemingly smiling face.

ALTHOUGH its existence has been documented for over 100 years, very recent research has cast more light on the nocturnal perambulations of the slow loris, essentially through night camera vision techniques.

The name slow loris is derived from a Dutch word ‘loeris’, meaning a clown. With its big eyes, set on a pleasant and seemingly smiling face, it is easy to see how this mammal acquired its name.

It does move in slow motion, almost sloth-like by day, but as an essentially nocturnal animal it can move more rapidly at night, stealthily creeping along the rainforest canopy to steal up to an unsuspecting bird, insect or lizard. The speed of its powerful hands to catch its prey has to be seen to be believed.

I have only ever seen three slow lorises in very different locations and situations in Sabah and Sarawak.

The first time was on a night incursion into the rainforest at Danum Valley in Sabah, where I caught a glimpse of its glittering eyes with my head torch. My second sighting was in daytime at Bako National Park but again it was a fleeting view of this furry ball asleep as a pack of marauding macaques snapped at my heels!

My third encounter with a slow loris is the most indelibly inscribed in my mind — when I stopped to buy vegetables from a roadside stall in Sabah. The stall owner invited me behind the facade of his roadside vegetable stall to buy captured wild animals.

I saw curled up and penned-in pangolins, caged birds, and most tragically a slow loris tethered by a dog collar and chain to a roof rafter. This was my first experience of the truly dark side of illicit animal sales. Suffice to say without sufficient money, I walked away in absolute disgust.

Robert Shelford, Sarawak Museum curator from 1897 to 1904, described the slow loris in his 1916 book ‘A Naturalist in Borneo’ as “a slow moving arboreal animal with no tail and large eyes”. According to Shelford, this animal was “used to provide medicinal and magical properties”. He then lists, how each part of the animal’s anatomy was used for alleged, but never scientifically proven, medicinal potions for this or that ailment. It makes for gory reading.

Shelford assumed that there was only one species of slow loris in Borneo, which he recorded as Nycticebus tardigradus. A century later we now know of five species, each with its own distinctive head markings.

The smallest species of this animal, which lacks a second incisor tooth, the Borneo slow loris (Nycticebus menagenis) is named after the Menage Scientific Expedition to the Philippines in 1894. Found mainly in primary and secondary lowland forests, it weighs up to 300 grams and is distinguished by its round head, very short ears, red to golden brown fur and vestigial tail.

In 2012 a new species, Nycticebus kayan, was discovered living in Borneo and in the Philippines. This was the result of an expedition led by Professor Anna Nekaris from Oxford Brookes University in the United Kingdom, and United States researchers Professor Susan Ford of Southern Illinois University and Dr Rachael Munds from the University of Missouri. Their joint knowledge on slow lorises has yet to be equalled in the realms of zoology.

Owing to its nocturnal movements, shyness and natural evasiveness, little has been filmed or recorded on the slow loris. More closely related to Australian bush babies and Madagascar lemurs than to monkeys and apes, the slow loris grooms itself by using the its second toenail on both its hind feet. These toenails are claw-like for scratching and loosening moulting fur and insects ready for its tongue to take over in dog-like grooming in licking away at every centimetre of its fur. Its other fingers and toes are similar to those of primates, with almost blunt nails and sticky pads. Unlike apes and monkeys, however, the slow loris’ nose is not whiskered or dry, but moist like that of a dog.

Whilst humans and other mammals may have multiple births, none have so far been recorded amongst slow lorises. Producing a single baby at a time, the babe clings tenaciously to its mother’s chest to suckle from her two teats.

At night time and when on the prowl for food, a slow loris marks its territory by emitting pungent urine. As a defence against other treetop predators, it can emit an oily toxin from a branchial gland in its elbow. If it licks this and bites a human or any other mammal, this may cause fatal anaphylactic shock.

In order to sleep by day, this essentially nocturnal animal clings tenaciously to a vertical branch curling up into a furry ball. It does not develop any form of muscle cramp even when its muscles remain constantly tense, for it has an amazing network of blood vessels that distribute its blood flow evenly through its muscle tissues.

Tragically, this seemingly cuddly bundle of fur with its smiling face is seen as a target for the illegal and exotic pet trade by providing its forest captors with a little money, the middlemen with yet more and the sellers worldwide with fat profits.

Horrifyingly, captured slow lorises undergo the cruel extraction of their canine and incisor teeth by ordinary pliers, or these teeth may be clipped by nail clippers or rasped by files. Such literally defiled animals are then no longer able to feed properly and never live long in captivity.

The continued existence of all species of slow loris in the Bornean rainforest lies in our human hands and those of ensuing generations living within rainforest environments and with plantation planners who should optimise production of their crops on the multi-hectares they already possess without nibbling at yet more of the rainforest.

The slow loris is indeed a vulnerable and threatened species of mammal classified as such by the International Union for Conservation of Nature (IUCN) Red List of endangered species. The Convention on International Trade in Endangered Species of Wild Fauna and Flora (Cites) Appendix 1 states quite categorically that this animal is banned from commercial trade.

Nekaris and Mund have inaugurated a trust fund to educate young children in a Bornean rainforest school about saving the slow loris. This is practised through teaching the three Es – Ecology, Education and Empowerment. What those children have learned and disseminated to their parents and grandparents via The Little Fireface Project is a model for all educationalists to behold. For details go to www.nocturama.org. 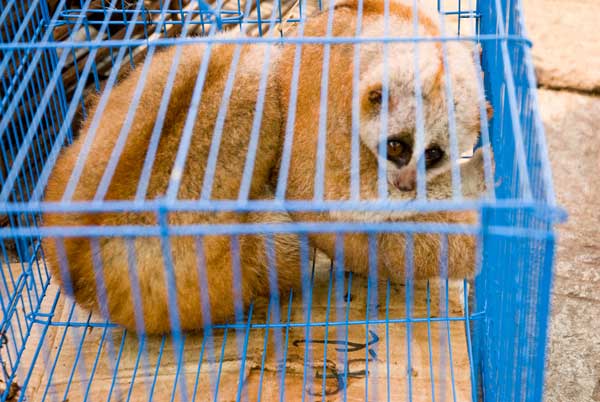 Slow lorises are often targeted by the illegal and exotic pet trade.