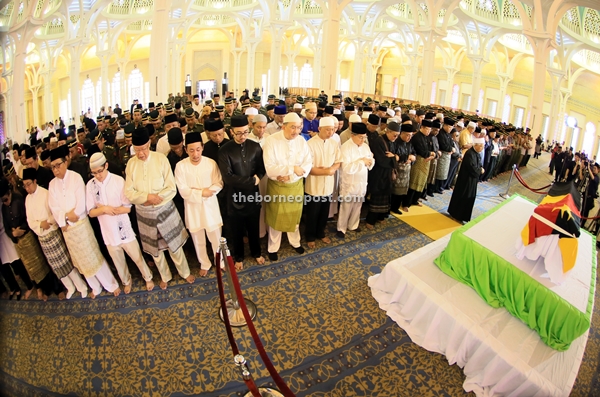 KUCHING: There was a momentary pin-drop silence when Jamek Mosque head imam Datuk Joji Suhaili, who was reciting prayers for the just-buried remains of the late Tun Abdul Rahman Yakub, was overcome by emotion here this afternoon.

Abdul Rahman, 87, passed away at the Normah Medical Specialist Centre at 9.34 last night. This morning, his remains were taken to the Jamek Mosque first to enable the public to pay their last respects.

Almost 2,000 people thronged the mosque compound since 10am. Others who turned up were Abdul Rahman’s nephew, Head of State Tun Pehin Sri Abdul Taib Mahmud, and several state cabinet members.

Earlier, there was a change in weather when rain came, as the coffin which was carried by four personnel from the Army, and two from the Royal Malaysian Air Force, headed by RAMD Bravo Company chief from Semenggok Camp Major Mohd Shahfuddin Ismail, left the mosque for the cemetery.

Yesterday, the state government issued a statement cancelling all official events today, and directed state and federal flags to be flown at half-mast.