Sunday, April 18
You are at:Home»Columns»Uncle DI»Is the Federal Constitution being undermined? 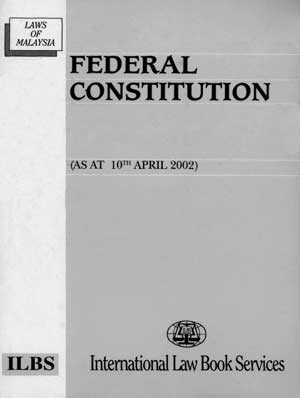 AN open letter was published in a national newspaper on Dec 8 last year. It was penned and signed by a group of 25 citizens who once held high positions in various vocations in the country. Among them are former top civil servants, ambassadors, academicians, and civil rights activists.

Indeed, these are prominent members, not only of the Malay community in the peninsula, but of Malaysian society who happen to be Malays and, by definition, Muslims. Hence, the weight placed on their views regarding such issues as race relations and religious freedom in Malaysia.

Apparently, quite alert to what’s going in the country though in happy retirement, as moderate Muslims, they are disturbed and deeply dismayed while following the debate on the position and application of the Islamic laws in the country. They think that there is a “lack of clarity and understanding on the place of Islam within the constitutional democracy”.

They have come up with a litany of complaints to be addressed by the government. The gist: the alleged breakdown of the federal/state division of powers over criminal and civil jurisdictions, the religious bodies asserting authority beyond their jurisdiction and issuing fatwa in violation of the Federal Constitution without having resorted to the consultative process of Shura in the first place.

They also contend that the rise of supremacist NGOs, which regard any dissenting voice as being anti-Islam, anti-monarchy, and anti-Malay would make attempts at rational discussion and conflict-resolution difficult.

And when they refer to the use of the Sedition Act as a constant threat to silence anyone with a contrary opinion, it was a powerful side kick. That may have hurt the feelings of those in favour of the retention of that oppressive law.

The moderate stand by the group of 25 has been supported by various quarters. The number of civil society groups increased to 93 after the  members of 140 Chinese community associations and others in the peninsula came up with their support.

In view of the seriousness of the debate over the position and application of the Shariah law vis a vis the civil court system, the 25 prominent Malays would prefer the Prime Minister himself to lead a national consultation in order to find ways and means by which those disputes could be settled once and for all.

However, no notables in Sabah or Sarawak have expressed support or otherwise for the views of the prominent Malays. Nor have they commented on the views of another peninsula group who call themselves Pemikir Melayu (Malay Thinkers).

Basically, the latter group agrees with the former in terms of a consultation but thinks that the disputes over the position and application of the Islamic laws have been marginalised by the Federal Constitution itself. And they want the government to appoint a committee to review that Constitution.

As Dr Chandra Muzaffar rightly suggested in a publication on Jan 5: “if the group’s only goal is to ensure the supremacy of the Islamic law, it may not be comfortable with the rational evaluative approach to both systems which the committee will have to adopt in order to produce just solutions”.

In other words, they would like the jurisdiction of the Syariah courts to be as wide as those of the civil court system based on the English common law. As it is, the Islamic law has a limited application in our system – applicable only to matters relevant to the adherents of the Muslim faith. That was by design of the framers of the Malayan Constitution, which was happily adopted in 1957, and, with certain modifications, by the founding fathers of Malaysia in 1963.

If the Group 33 had their way, there would be a review of the existing Constitution or in effect the rewriting of a new one in order to suit the wishes of the majority of the population as claimed by the Pemikir 33.

I think they know that when the Constitution of the Federation of Malaya was being drawn up by the Reid Commission in 1948, it was not to be copied from the Constitution of Pakistan or of Iran in which the ‘Islamic state’ is constitutionally enshrined, but a typically Malayan identity because of the multiracial and multi-religious composition of the Malayan population. In 1958, at a meeting of the Federal Legislative Council, the Prime Minister Tunku Abdul Rahman said: “I would like to make it clear that this country is not an Islamic State as it is often generally understood, we merely provide that Islam shall be the official religion of the state.”

The Tunku is not with us any more but this assurance by him who also became the Prime Minster of Malaysia is as valid as it was in 1958. For the Malayan Constitution was adopted, with certain modifications, for the new nation, Malaysia. There was no time to produce a new constitution, so the provision relating to the position of Islam and its application, if limited in its scope, was agreed to from the beginning. To review this is now is tantamount to rewriting a new constitution for Malaysia. Still they think the present Constitution is not adequate enough to accommodate their wishes.

However, if anybody can have its provisions viewed, then there is every possibility that other interest groups in the country would follow suit to suit their own interests and needs, the interest of other groups notwithstanding. There will be chain reactions, for sure.

Fortunately, for the rest of the life of the present parliament, there is a problem of getting a two thirds majority of votes for any motion to amend the Constitution unless the opposition MPs decide to support the government for a change. Anything can happen. They have been quiet over this debate.

If we are free to have a second look at the Constitution, then Article 153 (Reservations in respect of services, permits, etc, for Malays and natives of any of the States of Sabah and Sarawak) is a soft target by people who have been at it for sometime.

I remember that when attempts were made to do away with it, a fierce debate erupted during one of the meetings of the National Economic Consultative Council (NECC) in 1989.

As this particular provision of the Constitution relates to Native privileges, perhaps, this may stir those in Sabah and Sarawak to wake up and to join this current debate and make their stand.

After a long pause since their open letter was published, this week saw a reaction from the Prime Minister at last to the open letter from the prominent Malays.

A representative of the group of 25 and officials of the PM’s Department had met to draft a brief for the PM before he meets with the prominent Malays. Then, to be fair, he should also see the Pemikir Melayu 33 and see what they think.

Should it be decided to review the Constitution as this latter group insists, then people in Sarawak and Sabah had better be prepared with ideas of their own for a new document containing a new deal for them.

Will the new Constitution remain the supreme law of the country?