Tuesday, May 24
You are at:Home»News»Sarawak»SPDP can still win Tasik Biru — Nogeh 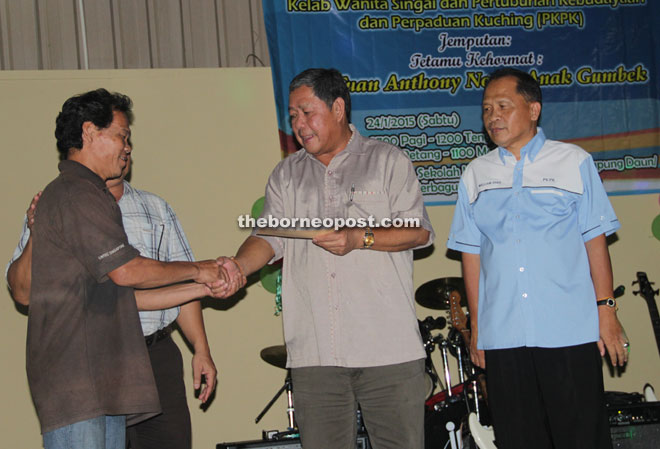 Its secretary general Anthony Nogeh Gumbek said the party was not short of winnable candidates who were already moving around to meet and familiarise themselves with the constituents.

Brushing off a claim made by Parti Tenaga Rakyat Sarawak (Teras) on Tasik Biru, Nogeh stressed that Tasik Biru was traditionally a seat for SPDP and should remain that way under the Barisan Nasional (BN) spirit.

“As the incumbent, he (Teras deputy president Datuk Peter Nansian) will of course say he is the most winnable candidate. But from our angle, we are saying the seat is traditionally held by SPDP, and it will be given to SPDP as a component of BN.

“We (SPDP) also have winnable candidates who are already moving around with me in the constituency. At the end of the day, it is up to the top leadership to make the final decision,” he said when met after officiating at the Folk Sports Programme prize giving ceremony at Kampung Daun, Singai, on Saturday night.

Nogeh, who is also Mas Gading MP, was asked to comment on a news report quoting Teras president Tan Sri William Mawan as saying that Teras would nominate Nansian to defend Tasik Biru.

Mawan, when opening the Teras Tasik Biru inaugural general meeting on Jan 18, claimed Nansian was still the best person to win the seat due to his strong performance as a BN elected representative and assistant minister.

Nansian, who has held the Tasik Biru seat since 1996, successfully defended the seat in the 2011 state election under the SPDP ticket, before he was expelled from the party.

Teras is currently not a BN component but its leaders claim the party is part of the BN-Plus government in Sarawak.

On SPDP’s winnable candidates for Tasik Biru, Nogeh said they include two very capable and highly qualified persons who now join him at functions in the constituency to introduce themselves and learn about issues and problems facing the constituents.

He however chose not to publicly reveal their identities at this moment, but party sources said they comprise a senior government officer and a lawyer.

“We are confident that the candidate picked from SPDP will win,” he said, adding that state election could be held end of this year or early 2016.

He praised the Singai Women Club and Kuching Unity and Culture Organisation (PKPK) for organising such activity which encouraged healthy lifestyle among the people.