Friday, August 14
You are at:Home»News»Sarawak»‘Register with Labour Dept before working abroad’ 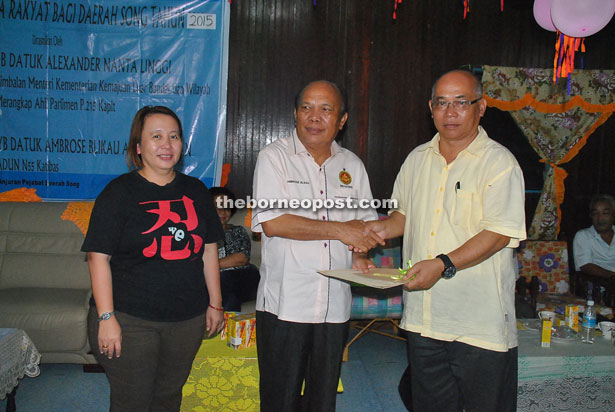 Blikau (centre) presents a memento and certificate to Kemas Kapit senior supervisor Ambrose Abong, who was a speaker at the event. At left is Song District Officer Jackline August.

SONG: Workers, particularly from rural areas, who wish to work overseas in industries such as timber should first register with the Labour Department.

“Those local workers, who wish to work overseas, especially in the timber industries be it in Papua New Guinea, Solomon Islands, Brazil or any other countries, need to register themselves with the Labour Department first so that the department has the relevant data on both parties, including the nature and place of work of the workers concerned,” he said during a leaders with the people event held by the Song District Office at Rumah Melayu, Nanga Latong recently.

“In addition, the workers concerned need to make an agreement with their employers that is legally binding as this is vital to facilitate efforts to trace them if there are any problems arising later on.”

He called on the people to share the correct procedures with their colleagues, friends and relatives who wish to work abroad “to ensure that the workers are not cheated”.

Blikau said he has come across several cases of local workers working abroad who were cheated by companies and could not return home due to financial constraints.

“Once you are registered with the Labour Department, should there be any problems arising, then the department concerned could easily trace which is the company responsible as they have the records,” he explained.