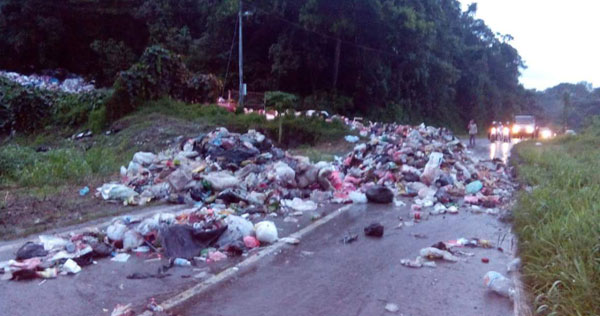 Mountains that attract visitors from rodents and company.

THIS district is full of beautiful mountains, a large man-made lake near town and various tourist attractions around – the caves (supposed to be inhabited by beautiful fairies), the clean streams, the villages.

Near the Malaysia-Indonesian border, there is a brisk trading – a favourite shopping destination for many townies over the weekend.

A major part of the district has also a rich history of mining of antimony, of gold, and of brave people who rose against the Brunei rule before the Brooke Era and during that era itself.

However, as a tourist destination, its name has been tarnished by the recent news about mountains of rubbish that remained uncollected for days at the bazaars and villages under the jurisdiction of the Bau District Council.

The mole hills of household refuse placed in the bins provided at the collection points in Buso, Tondong, Paku, Siniawan and along the roads leading to the 80 villages, had developed into unedifying mountains attractive only to dogs and rats. They have been a health hazard for the ratepayers of the district.

Overnight, the good name of the area has been tarnished. How is one to sell such a destination to foreign tourists?

The responsibility for proper rubbish collection and its timely disposal lies with the local government. It collects rates from the inhabitants in return for providing them with a scavenging service – a good legacy of the British colonial government since 1948. Not all that is British is to be rubbished.

The actual scavenging work is given out to contractors who are well equipped with proper facilities and supplied with the necessary funds.

That’s another legacy of the colonial government: the rule of law.

We are not told why the rubbish was not collected on time as stipulated in the agreement. So we cannot say for sure which party has defaulted in this case. All we know is that the state cabinet has directed the Bau District Council to do something about the rubbish.

At once this explains the ineffectiveness of a district local authority whose councillors are not elected. The trouble with this type of democracy is that the political appointees are not responsible to the ratepayers; they are responsible only to the political party presidents who put them there. This is allowed to happen because the local government elections adopted by Sarawak since 1948 have been abolished. We have ignored the fact that local government and its elections were part of the bargain successfully made and obtained by the founders of Malaysia in 1963 for the benefit Sarawak. We have thus abandoned our claim to this term and condition of Sarawak’s participation in Malaysia. Can someone explain this shooting ourselves in the foot?

So when there is poor enforcement of council policies on the ground, the enforcement staff get the blame. When the contracts cannot be enforced, the staff are reprimanded. When politics gets in the way, the staff get a scolding.

A good carpenter does not blame his tools bah.

While all this bureaucratic wrangling is going on over lines of responsibilities, the rubbish on the ground remains uncollected and rotting away in the sun and the rain.

Can you tell the ratepayers not to grumble?

As the system stands, councillors represent the interests of their bosses: the presidents of their respective parties, not necessarily of those of the ratepayers, to the detriment of the welfare of those in the district.

In the old days, local authority councillors were each allocated a ward to look after; the welfare of the ratepayers was their primary concern and object of service – rakyat diutamakan. People could ring up their councillor and gripe about overflowing drains, too many stray dogs, or uncollected rubbish or even noise pollution. It would be a good idea to assign one councillor to look after the enforcement unit of each council. He or she has to work hard, otherwise he or she would not get re-elected.

Which of the BDC’s councillors is responsible for the rates and rubbish collection in Bau?

Is it necessary for the supreme council of the state to burden itself with a rubbish collection issue at the local government level?

Haven’t the members of that cabinet other more pressing problems to tackle: thinking or formulating better ideas with which to develop this state further – such as the importance of reviving local government elections?

You and I have to pay rates, and if we don’t we get fined. We deserve to  have a say on how the money is spent. Remember the slogan of the American patriots from the Boston Tea Party over 100 years ago: “No taxation without representation!”

But we will pay the rates on time, rubbish collected or rubbish uncollected, because that is our obligation under the by-law. But at the same time we should be allowed to know as to who or what should we blame for the failure to implement policies or execute contracts. Our proverbial carpenter or his tools?