Monday, February 6
You are at:Home»Features»Fulfilling the wish list of Balingian’s constituents
For the freshest news, join The Borneo Post's Telegram Channel and The Borneo Post on Newswav. 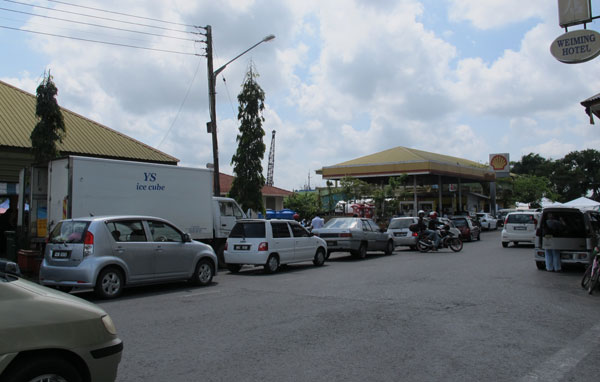 Rapid development in Mukah town has resulted in long queues at the petrol stations and traffic jams in the vicinity.

SIX of their seven top election wishes are coming true for the people of Balingian.

Other development projects the government has promised them are also in the pipeline.

Yossibnosh Balo, who is now Balingian assemblyman after winning the by-election in the rural state constituency recently, said the implementation of almost all the projects promised was underway and at different stages of completion.

“Both the state and federal governments have kept their word,” he said.

Before the by-election, the people of Balingian had forwarded their seven top wishes to thesundaypost. All are now at different phases of fulfilment except for Wish No. 6.

For the past 20 years, the people of Balingian town and Kuala Balingian have been asking for the school to be built.

Without a secondary school, parents have been sending their children to Mukah, which is 60km from Balingian.

This is not only expensive but also stressful for the parents. Their children, who are only 13 years old, have to board at the school where social ills involving drugs, alcohol and teen sex have been reported.

It is thus not surprising that parents in Balingian sub-district have — over the past two decades — been calling for a secondary school to be built in the area.

Their long-standing wish was finally granted when Deputy Prime Minister Tan Sri Muhyiddin Yassin went to Mukah to campaign for Yossibnosh during the by-election.

Empathising with the plight of the parents, Muhyiddin who is also Education Minister, made an on-the-spot allocation of RM60 million for the construction of a secondary school — to be known as SMK Balingian — in Balingian Sub-district. He also announced the project would start this year.

Yussibnosh said the site had been identified and surveyed. 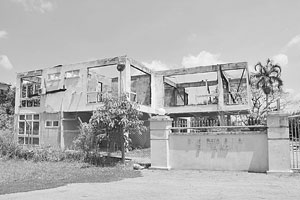 Most government agencies have been relocated from Balingian town to Mukah town.

According to Yossibnosh, the project is now awaiting tender documentation.

The old SK Kampung Tellian, which catered to three Melanau villages — Tellian Tengah, Tellian Ulu and Tellian Laut — was deemed unfit for schooling almost a decade ago and all the pupils were asked to attend SK Mukah, 3km away, as a temporary measure.

The old school building has rotted beyond recognition.

Even though all the pupils had grown up, there were still no signs the school would be rebuilt until Muhyiddin’s visit to the area during the by-election. There and then, the constituents began to see a ray of hope.

The Deputy Prime Minister did not disappoint them. He promised an allocation of RM19 million for the reconstruction of the school although he did not give any time frame.

However, the good news is that the site has been identified and once the tender process is finalised, construction will begin.

“This is exciting news. Although the Deputy Prime Minister did not promise the time, it appears the project will start sooner than anticipated,” Yossibnosh enthused. 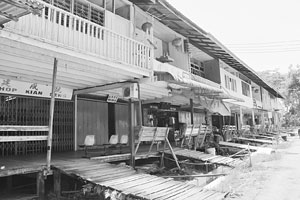 The old town of Balingian consists of two rows of wooden shophouses.

Yossibnosh said the government had agreed to repair or rebuild all run-down village bridges.

“As far as I know, such projects, including for the Kampung Baru Bridge, have been given to a private company. I’m not sure about the latest development regarding these projects.”

Although they are small, many bridges in Balingian Sub-district — such as the Kampung Baru Bridge — serve the useful purpose of connecting the villages with Balingian town.

For years, the 30-year-old Kampung Baru Bridge has served as a vital communication link for the Melanau villagers from Kampung Masjid, Kampung Pulat, Kampung Lintang, Kampung Baru and Kampung Suyong.

But this bridge is now in disrepair and needs to be fixed urgently. There is a high risk it may collapse anytime under the heavy weight of passing vehicles.

Wish No. 4: New airport for Mukah

The new airport for Mukah to boost the capacity of the present landing strip, which can only accommodate 18-seater planes, is long overdue.

A site has long been identified and though the project should have been completed a few years back, it had been kept in abeyance until the by-election.

During the by-election, the government announced a first-package allocation of RM133 million for the new airport. It also disclosed the contract had been awarded.

As a follow up, Yossibnosh noted that the new airport was now under construction and to date, 16 per cent of had been completed.

Wish No. 5: Setting up another petrol station in Mukah

A simple wish but fulfilled only after the by-election.

Mukah town has only two petrol stations — one at Jalan Pasar, the other at Jalan Mukah-Oya.

Because of the rapid development taking place in Mukah, the residents want another petrol station to serve the town.

They say this will not only to ease the traffic along the road where the present two stations are located but also meet the demand of a growing motoring population.

According to Yossibnosh, a new petrol station has been set up near Jabatan Kuning (Mukah Bridge). The wish is, thus, considered fulfilled. 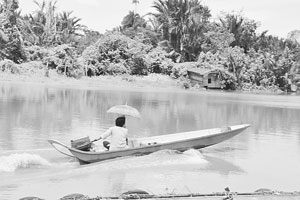 Longhouse folk travel to Balingian by longboat. Their fervent wish is to have clean water supply.

Yossibnosh said the contract for upgrading the present 40MLD (million litres per day) water supply to 60 MLD had recently been awarded, adding that once the project was completed, clean water supply would be connected to Mukah, Balingian and the surrounding longhouses

The residents of Balingian Sub-district, including those of Balingian town and across the Balingian River, have been patiently putting up with the lack of clean treated water.

The hardy folk have been depending either on well or rain water for daily use.

During long dry spells, they even have to resort to using the water from the murky Balingian River for consumption.

Of the seven wishes, Yossibnosh said the government had yet to fulfil the sixth — bringing development to Balingian town.

The sleepy hollow has been bypassed by development taking place in the area. Shophouses, built 20 years ago, remain vacant except those converted for swiftlet farming.

There is a big gap between the development of Balingian and Mukah where the headquarters of the Sarawak Corridor of Renewable Energy (SCORE) is situated.

While Mukah is thriving, Balingian town is seen to be struggling, especially after the relocation of all the government agencies to Mukah.

This has prompted calls for government intervention to bring more development to the dying town.

So far, Yossibnosh has heard nothing about development being brought to Balingian town.

“There is still no development to speak of yet. I hope the people can hang on as there are projects earmarked for Balingian constituency as a whole,” he said.

Yossibnosh also pointed out that while there were no obvious development projects in Balingian town, the government had brought progress in some other areas not on the wish list.

“Under the quick-win plan, the state government has given me allocations to meet the immediate needs of the constituents.

“I have agreed to build four community halls for Ulu Bayan, Balingian town, Sebetong area and Kampung Petanak. These projects will be undertaken by the Public Works Department.”

Apart from the community halls, Yossibnosh said the state government also planned to give land titles to the residents of Jebungan and Kuala Balingian.

“This is the promise of the Chief Minister (Datuk Patinggi Tan Sri Adenan Satem) to the people during the by-election.

“I have been informed that the promise will be fulfilled once the state government has processed the land titles.”

As the elected representative of the area, Yossibnosh said he is happy to know the promises made during the by-election being brought to fruition.

“Or else, it would be hard for me to meet the voters. How am I going to answer to them when promises remain just promises?” he asked.