Friday, August 12
You are at:Home»Features»Long-term solution needed to turn the tide 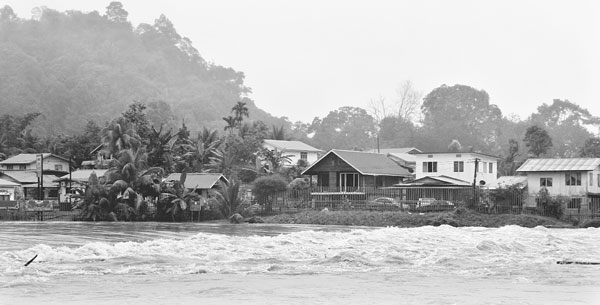 WHEN they come, they cause millions of ringgit in damage every year.

Floods are common in Malaysia, especially in the east coast states of the peninsula as well as Sarawak and Sabah.

At least 21 people died and 200,000 were forced to evacuate their homes as flood waters swept through the low-lying areas of these states.

This natural disaster is caused by coastal, estuarine or riverine flooding.

Coastal or estuarine flooding is seen when the river water is unable to flow to the sea — due to high tide or natural blockage such as sandbars or storm surges, resulting in flooding of the adjacent land.

Riverine flooding results from heavy or sustained rainfall, causing a river or creek to swell beyond the capacity of its monsoon drains. What follows, in consequence, is inundation of the adjacent floodplain.

People living near rivers or in low-lying areas face the greatest threat of floods.

The floods reportedly displaced more than 100,000 people from their homes nationwide but most tragically, thousands of Malaysians — both young and old — were left stranded wet, cold, sick and hungry for several days before help arrived.

While generally considered part of the natural cycle of weather patterns, floods in Malaysia are possibly also caused by human factors such as deforestation, over cultivation, poor water management and population pressure.

Sarawak experienced the worst floods in 2003 and 2004, when thousands in Kuching, Bau, Kota Samarahan and Sibu were evacuated.

Many primary and secondary schools in low-lying areas were closed for days.

And recently, several parts of the state such as Kuching, Serian, Samarahan, Padawan and Limbang were also badly hit by floods.

Indeed, floods not only cause great financial hardships for individuals and communities but also loss of life. 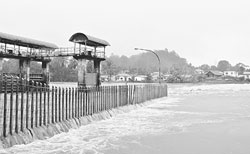 Natural Resources and Environment Deputy Minister Datuk Seri Dr James Dawos Mamit warned there is no stopping the floods, pointing out that things could be worse in future.

He said climate change has resulted in frequent heavy rainfall, adding that in the past, Sarawak — and Malaysia at large — experienced about 30 per cent rainfall but this has increased to about 40 per cent at the end of the year.

“If there is high tide, there will be flooding,” he noted.

Dawos, an environment scientist, said the present sea level had increased by 22 centimetres due to global warming while the highest king tide was estimated at 6.30 metres — over 20 feet.

He added that when sea levels continue to increase, the king tide would also increase in tandem.

“Scientists have projected that sea levels will increase by 50 centimetres in 2050 — meaning the king tide may also increase to eight metres.

“So if heavy rain is sustained over a few days during the king tide, there will be bigger floods in Malaysia — or even Sarawak.”

Dawos, the former state environment adviser, stressed it was high time both the federal and state governments look seriously into a long-term solution to mitigate the problem.

He said in the case of Sarawak, more barrages or even dams need to be built as a counter measure.

“For example, we need one barrage to control water flow in Batang Sadong and another across the Sarawak River. Both barrages will help mitigate flooding in Serian and Kuching.”

Dawos said the barrage at Sejingkat helped control river and tidal flows and had eliminated most of the tidal variations in water level previously experienced in Kuching.

He suggested another barrage across Sarawak River be built to replace the submersible weir at Batu Kitang.

The submersible weir was designed primarily to increase the safe yield of raw water from the Sungai Sarawak Kiri tributary.

Dawos has recommended an inflatable weir, widely used by water corporations in some countries to control river and tidal movements in the lower reaches of the river.

Among others, an inflatable weir is low cost, compared to other controlled-gates, has low environmental impact, long service life, very low maintenance, safe deflation under any conditions and the ability to control water level.

Inflatable weirs have been installed in more than 20 countries, including Mexico, Japan, Norway, Thailand and the United States.

Dawos said the inflatable weir at Batu Kitang was recommended to prevent possible major flooding in the area and upriver.

“I advised the authority concerned that a concrete weir would cause siltation and even flooding in years to come.

“And it has proven to be true… the structure has increased flood risks not only in the area but also along Sungai Sarawak Kiri and its tributaries.

“That’s why we see more frequent flooding occurring in the villages upstream of the weir during prolonged downpours.”

Dawos said because of siltation, the riverbed upwards of the weir became shallow and when there was sustained rainfall, the river would flow back upstream and into its tributaries.

He noted that many villages along the tributaries of Sungai Sarawak Kiri have been experiencing floods more frequently than before the construction of the submersible weir.

The 1.5 metre high submersible weir was built across the Sungai Sarawak Kiri channel in 2005 to increase the safe yield of raw river water.

Dawos said if not for the barrage at Sejingkat, many villages upstream would have experienced prolonged floods during persistent rainfall and the king tide.

He pointed out that this was what happened to villagers along the Batang Sadong where their houses remained in water for several days.

“If a barrage were built downstream of Batang Sadong, water flow could be controlled and prolonged flooding prevented in villages such as Kampung Sebemban and Kampung Tanah Putih in Serian.” 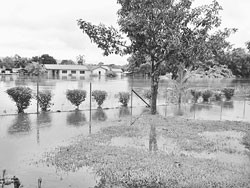 SK Sebemban in Serian was forced to close for a week.

He added that siltation, caused by soil erosion, would eventually cause flooding in the Sarawak River as increased sustained heavy rainfalls would wash down silt and reduce the depth of the river.

“As we can see, soil is being carried downstream by the run-offs as a result of development upstream. Because de-siltation is unlikely to be carried out, a diversion channel is the solution.”

Dawos also said a diversion channel — some eight metres long — was “very important” to avert flooding not only in the low-lying areas and the city but also in its surrounding areas, including Batu Kawa.

According to him, the whole diversion channel, beginning from Kampung Paroh, will divert excess water in the Sarawak River to the sea.

This project (originally costing RM1.4 billion) is to be built in stages — with the first phase already completed a few years ago.

Dawos said phase one, covering a stretch of 2km, was carried out in 2009 at a cost of about RM140 million. The other phases were supposed to be implemented under the 10th Malaysia Plan (2011 to 2015).

He added that the main components of the project are construction of a flood diversion channel, bunds, a barrage and tide gates. 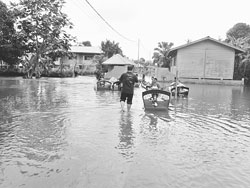 Flooding is seen at Kampung Tanah Putih in Serian.

The project was initiated after the city was hit by the worst floods in 2004.

The recurrent floods in 2004, which were the biggest, caused significant damage to properties and severely disrupted transport and communication.

Roads between Kuching and the inland areas were cut off by rising flood waters.

One of the worst hit roads was the Kuching-Batu Kawa-Bau expressway that ran across the Sarawak River via the Batu Kawa Bridge. The road, coded as Federal Route, is the backbone of the local road system.

Dawos said dams could help prevent loss of life and property to flooding, adding that flood-control dams impounded flood waters, then either releasing it under control to the river below the dam or store or divert the water for other uses.

He said for centuries, people had been built dams to help control devastating floods.

The Bengoh Dam, if fully operational, will help reduce flooding in areas downstream.

“It can serve as a retention dam to hold excessive water from sustained rainfall,” he explained.

The Bengoh Dam was constructed in 2010 to ensure adequate supply of raw water to the Batu Kitang Water Treatment Plant to meet increasing water demand from 2010 to 2030.

This reservoir is expected to store 144 million cubic metres of fresh water covering an area of 8.77 square km.

Previous ArticleFort Alice given a new lease on life
Next Article Do we can the cane?