Thursday, June 4
You are at:Home»News»Sarawak»Strange creature at oil palm plantation may be a sun bear species — Forestry 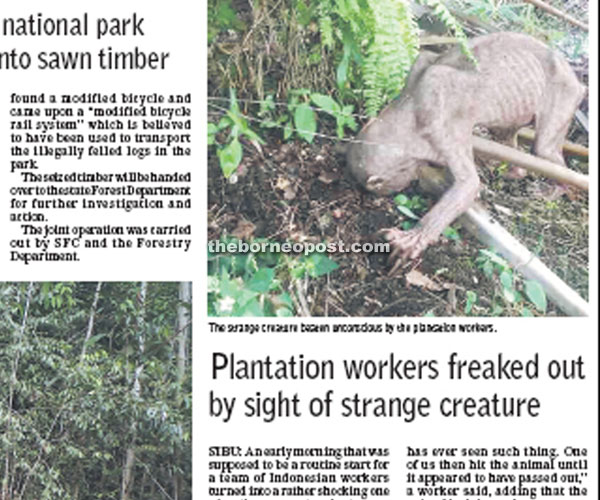 KUCHING: It is believed that the strange animal spotted by Indonesian plantation workers near Sibu on Friday is a species of the sun bear that is sick.

A spokesperson from Sarawak Forestry Corporation told thesundaypost yesterday that the observation was based on several characteristics of the creature, namely a black nose and long claws.

“It is highly possible that the animal was sick, as it appeared to be losing hair.

“We are not sure what sickness. Due to floods, our Swift Wildlife Action Team (SWAT) is unable to do any rescuing. Therefore, we can only confirm once we rescue this animal. The reason why it appeared at the plantation (on Friday) is because its habitat had been flooded,” the spokesperson said, adding that there is a secondary forest near the plantation.

Early Friday, a group of Indonesian workers were shocked when they encountered a strange-looking animal at an oil palm plantation along the Bintangor-Sibu Road.

According to one of them, the creature charged at them at one point.

“We were shocked. None of us has ever seen such thing. One of us then hit the animal until it appeared to have passed out.

“It could be a rare species of bear. When it regained consciousness, we forced it to go back into the jungle,” he told reporters.

Plantation workers freaked out by sight of strange creature

‘Strange creature’ turns out to be sun bear

Freaked out but creature ‘unharmed’