Thursday, July 2
You are at:Home»News»Sarawak»Freaked out but creature ‘unharmed’ 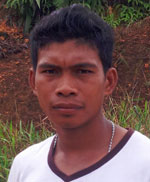 SIBU: Herman Tutu, one of four Indonesian workers who sighted the ‘strange creature’ in an oil palm plantation at Bintangor in Meradong District on Friday, said they did not harm the animal.

Dismissing allegations on social media, he said he quickly grabbed a tree branch for protection when the animal charged at them at one point.

Flashing back to the incident when they were freaked out, he said he and three other co-workers including his wife were about to finish work at about 1pm when they encountered what Sarawak Forestry believed was a ‘diseased sun bear’.

“Initially, we thought it was a dog or monkey.

“When we got nearer to check, we were shocked because none of us had ever seen such a creature.

“I poked it using the branch to force it back into the forest when it charged at us. The animal then bit the branch and we could only watch as it ripped the tree branch off,” said Herman when met at the plantation yesterday.

He said after that they forced it back into the forest.

Back at the workers quarters, Herman asked his colleagues to go along with him in search of the creature again but it was nowhere in sight.

The plantation manager, Golmie Ghani, said he was already informed by his workers of the incident.

“But so far, the relevant authority has not contacted me yet regarding the matter,” he said.

Meanwhile, the road leading to the site where the creature was sighted was still flooded yesterday.