Monday, July 13
You are at:Home»News»Sarawak»DAP warns commission of legal actions against redelineation 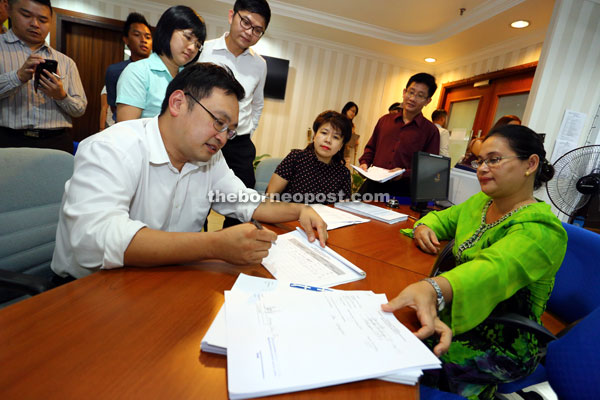 KUCHING: Sarawak DAP has warned the Election Commission (EC) that it could face multiple legal actions from the opposition, unless the redelineation exercise is done fairly.

While hoping that the judicial review filed by state PKR to declare as null and void the EC’s notice of proposed redelineation recommendations could succeed, Sarawak DAP chairman Chong Chieng Jen said his party was playing a different role by submitting their objections and proposals.

“We are putting our objections. It doesn’t matter if you knock them out but if it is unreasonable, there will be another court action.

“I don’t think they can have a plain sailing in this redelineation exercise unless they do it fairly and reasonably,” he said after handing the party’s objections/recommendations to the state EC office at Bangunan Sultan Iskandar, here, yesterday.

Sarawak DAP, led by Chong, yesterday submitted five objections and recommendations to the EC, of which two were from Lanang and Sibu.

In Kuching, besides recommending for Main Bazaar and Market polling districts that is currently under Padungan state seat to be included into Satok state seat, the party also proposed the creation of a new Tabuan Jaya state seat and new parliamentary seat Sungai Maong.

Chong, who is also Bandar Kuching MP, said with the creation of the new state constituency, the number of voters in Batu Lintang and Pending state seats would be reduced to 15,312 voters and 20,315 voters respectively.

“The reason for this creation of new seat is because the average number of voter per state seat in Sarawak is 13,526 voters, that is if you take the total number of voters and divide them by
82 seats.”

“At the moment, Pending has 30,881 voters, Batu Lintang has 24,614 voters which is way above the average. So to balance number of voters, we should have another extra seat Tabuan
Jaya.”

On the creation of Sungai Maong parliamentary seat, Chong, who is also Kota Sentosa assemblyman said it would cater for the constituents in two state seats namely Batu Lintang and Kota Sentosa with the total number of voters of 36,558.

Bandar Kuching parliamentary seat would cater for constituents in Padungan and Pending and newly created Tabuan Jaya state seats, with the number of voters in the constituency at 58,500.

Stampin parliamentary seats, it would consist of Batu Kitang and Batu Kawah state constituencies with 39,750 voters.

“The average number of voters per parliamentary seat in Sarawak is 36,779. Currently, Stampin has 60,997 and Bandar Kuching has 78,394 voters which are way above the average compared to parliamentary seats such as Lubok Antu, Igan, Tanjung Manis, Kanowit and Lawas which only have less than 20,000 voters. “

When asked whether it is possible to add another seat considering the state Legislative Assembly (DUN) had approved only 11 new seats, Chong said EC could either scrap the proposal to establish Gedong state seat with only 6,000 voters or for the DUN to pass another bill to increase another seat.

Meanwhile, as of yesterday, the total number of objections received by the EC for state seats were 17 objections and 16 for parliamentary seats. The objection period will end today (Feb 4).