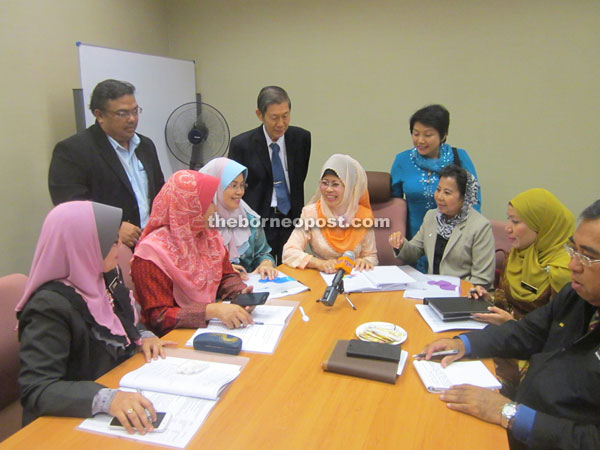 Fatimah (centre) speaking to Persima members at her office.

However, PDK supervisors and staff must attend an intensive course organised by of Welfare, Women and Family Development Ministry and the Malaysian Psycholinguistic Association (Persima) under the Modern Language and Communcation Faculty from University Putra Malaysia (UPM) before the project could be launched.

The intensive course, to be held in April, will prepare all PDK supervisors and staff members on the basics of speech therapy.

After the intensive course, the supervisors will conduct the speech therapies for children for 30 weeks (twice a week) at a ratio of one supervisor to four children. There will be two age groups for the therapy – one for those below five, andanother for those between five to seven.

“We are very glad to be given a chance to work with a team from Persima and UPM who are fuelled with passion and knowledge in psycholinguistic,” Welfare, Women and Family Development Minister Datuk Fatimah Abdullah told a press conference at her office here yesterday.

She added that the brain-storming session with Persima and representatives from the state Health Department and Welfare Department yesterday was to garner feedback and constructive proposals to strengthen the project.

Fatimah said that the project was timely for the state, which has only six speech therapists at government hospitals here, in Sibu and Miri.

“They cannot cater to all their patients in hospitals as well as all the 44 PDKs in the state.”

Currently, PDKs in Sarawak have a total of 2,446 children who are diagnosed with different types of disabilities.

Assistant Minister of Early Childhood Education and Family Development Rosey Yunus, project leader Assoc Prof Dr Noor Aina Dani who is a lecturer from UPM’s Modern Language and Communcation Faculty together with her colleague Dr Rohaidah Kamaruddin were also present at the function.