Friday, August 19
You are at:Home»News»Sarawak»3 killed in Engkilili road crash 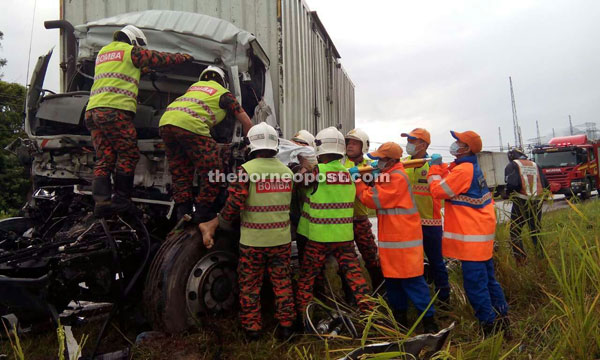 JPAM and Bomba working to remove the victims from the lorry.

In the incident that happened around 5.30am yesterday, one of the lorries parked by the roadside because of a flat tyre was rammed from behind by the other lorry.

The collision killed the driver and two passengers inside the lorry that rammed the one in front. The victims were identified as Robin Ngering, 44, Bong Soon Lee, 37, and Mathew Sinta, 29.

According to Civil Defence Department (JPAM) of Sri Aman Division officer Hafizul Abdul Samah, six personnel went to the scene of the accident around 6.46am following a call from the public.

“Our personnel took about half an hour to reach the scene to help Sri Aman Bomba personnel extricate the victims trapped in the lorry.

The deceased were sent to Sri Aman Hospital for autopsy.