Thursday, August 18
You are at:Home»News»Sabah»Driver killed as 4WD crashes into tree 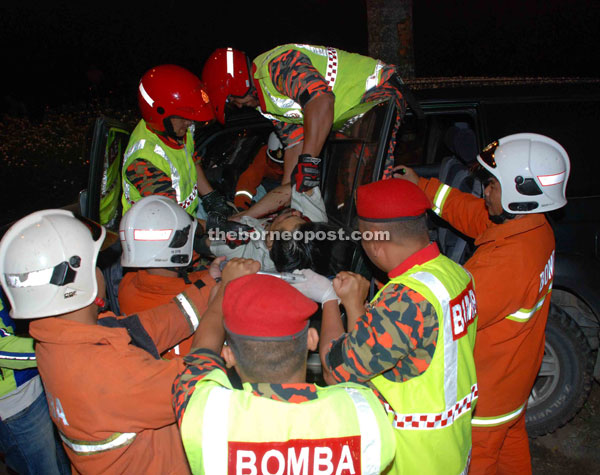 Fire and Rescue Services personnel extracting the victim’s body from the vehicle.

KOTA KINABALU: A man died after the Toyota Prado four-wheel-drive vehicle he was driving crashed into a tree on a road island at Tun Fuad Stephen Road, near Anjung Selera in Likas yesterday morning.

Pau Kek Wei, 29, from Taman Penampang was pinned in the driver’s seat and died on the spot in the 3.40am incident.

It is believed that the victim was heading to Sepanggar from the state capital when he lost control of the vehicle, which skidded off the road and went up the road island before ramming into the tree.

It took several minutes for the Fire and Rescue Services personnel to extract the victim’s body from the vehicle.

City police chief Assistant Commissioner M. Chandra said the victim’s body was taken to the Queen Elizabeth Hospital for a post-mortem and family members had been notified of the incident.

He said the case would be investigated under Section 41 (1) of the Road Transport Act 1987 and eyewitnesses were urged to come forward to assist in the investigation.