Thursday, October 22
You are at:Home»Columns»SingHealth»Goodbye to eye drops for glaucoma patients in future 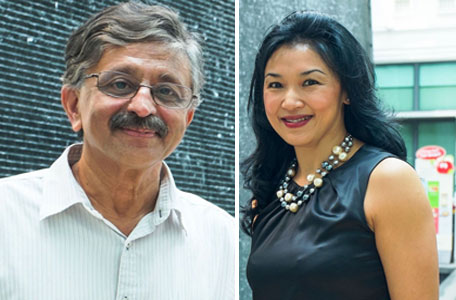 GLAUCOMA patients may, in the future, be able to replace their daily eye drop regimen for an eye injection once every six months, to treat their condition.

The injection to the eyeball is delivered under local anaesthetic by a doctor, and takes only a minute. It contains millions of tiny capsules of glaucoma medicine which release their contents slowly over time.

This breakthrough procedure was jointly developed by the Singapore Eye Research Institute (SERI) and a team from Nanyang Technological University (NTU). Six patients were involved in the first human trials in February 2013.

“We conducted the trial to ensure that the procedure was safe, feasible and workable,” said Associate Professor Tina Wong, Senior Consultant Ophthalmologist at the Singapore National Eye Centre’s (SNEC) Glaucoma Service and head of the Ocular Therapeutics and Drug Delivery Research Group at SERI. Prof Wong developed the injection with the NTU team led by Professor Subbu Venkatraman, Chair of NTU ’s School of Materials Science and Engineering. The team is ready to conduct larger clinical trials, most likely in the US, and the injection is expected to be commercially available in about two and a half years’ time.

Prof Subbu said it took four and a half years to move from concept to trial. “Nanomedicine is currently being used to treat cancer. The challenge in applying it was to take an existing drug, put it into a nano carrier and control its release over a long period. For glaucoma, the drug had to act for at least three months. We believe this has not been done before.”

Prof Wong said: “We consider this a major breakthrough, not just technologically but also in the way we can administer medicine, apart from through eye drops, to our patients in the future.”

In glaucoma patients, fluid build-up in the eye creates pressure which damages the optic nerve – the major cause of irreversible blindness worldwide. In Singapore, about three per cent of people over the age of 50 have it. SNEC sees up to 10,000 glaucoma patients each year.

Prof Wong said eye drops for glaucoma have some drawbacks. Some patients complain of red, itchy eyes and a bitter taste in their throats, and only five to ten per cent of the drug in each drop actually gets into the eye. “There’s a lot of wastage,” she said.

Patients’ main reasons for this were forgetfulness and stopping because they did not understand what the eye drops did. Prof Wong said: “This is why we have such bad glaucoma in Singapore. We doctors are prescribing medicine in good faith, but there’s still a problem with our patients’ ability to comply with what’s given. Ideally, we want something that will take away the responsibility from them. With sustained drug delivery through nanomedicine such as ours, we can ensure that the medicine is working round the clock. We get a more targeted release of the drug without the side effects of eye drops, and we will be able to manage the disease more effectively.”

• This story was first published in Singapore Health, Jan-Feb 2015.