Friday, December 2
You are at:Home»Sports»Football»Stubborn Crocs fight to the end 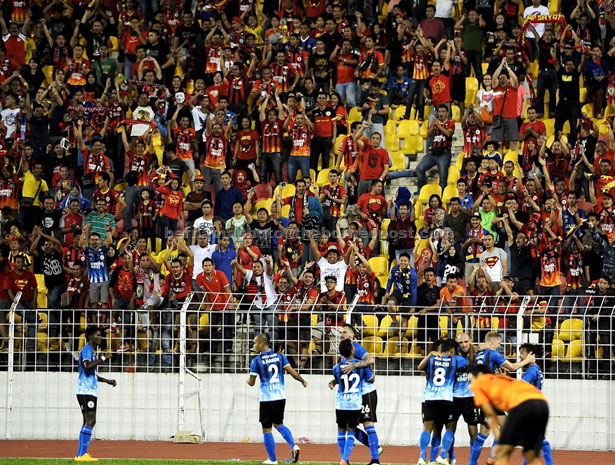 Sarawak fans salute the Crocs after Shahrol scored at the Selayang Stadium on Saturday. — Bernama photo

KUCHING: Sarawak kick-started their 2015 Super League campaign with a precious point from a 3-3 draw against Felda United at the Selayang Stadium last Saturday.

The result was crucial for the Crocs who are striving to secure as many points as possible in their away matches in the top tier.

Another positive for Sarawak fans was that Sarawakian-born youngster Shreen Tambi performed to expectation after being given the nod to start the match.

The midfielder, who played for the state youth team in last year’s President’s Cup, got the thumbs up from head coach Robert Alberts.

Overall, it was a spirited display for Sarawak as they had to come from behind twice through the course of their season opener.

Billy Mehmet drew first blood for the Crocs in the 13th min. Felda United equalised and scored another one before Hairol Mokhtar made it 2-2.

Things looked bleak again for Sarawak as Felda United went ahead for the second time in the 76th min.

Shahrol Sapari only secured the draw for Sarawak five minutes before the final whistle.

The Crocs will next play Terengganu – in their first home game – at the Stadium Negeri on Feb 14.